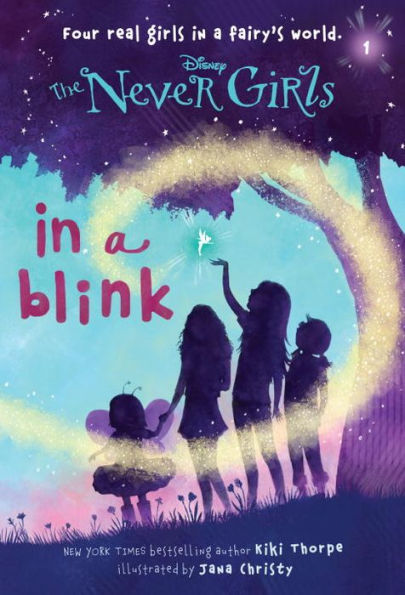 “This was the trouble with being a fairy who fixed things. Other fairies came to her with all kinds of problems, and not all of them involved pots and pans,” Tink. –In a Blink

In a blink of a fairy eye, Katie, Mia, Lainey, and Gabby are whisked out of their ordinary lives. The four girls are transported to Never Land, home of fairies and mermaids. The four girls want to go home eventually, but first, they want to explore the wonders of Never Land. Queen Clarion has put Tinker Bell and Prilla in charge of watching after the girls, but no one notices when Kate sneaks off in the middle of the night.

When Tinkerbell and Prilla sprinkle fairy dust on the four girls, everyone takes to flying. Everyone except Kate. When Kate sneaks off in the middle of the night, she doesn’t mean to cause trouble. But Vidia has been waiting in the shadows. Vidia promises to teach Kate to fly if Kate will bring Vidia a sock full of fairy dust. Will Vidia lead Kate into trouble? Will Kate, Mia, Lainey, and Gabby make it home?

In a Blink uses high-interest topics—fairy magic, Tinker Bell, and Never Land—to engage young readers. Fans of Disney princesses and Peter Pan will enjoy this fun chapter book aimed at young girls. The first installment of the series doesn’t have a well-developed plot but instead introduces both the humans and fairies. The three girls, Katie, Mia, Lainey, have a solid friendship even though they are completely different. Lainey’s little sister Gabby also plays a major role in the story and highlights the younger girl’s curiosity.

Two fairies, Tink and Prilla, take the girls on an adventure through the fairy kingdom. While the description of the fairy world is enchanting, not all of the fairy magic is explained, which may frustrate more advanced readers. The fairies have some fun, saying, “I’d fly backwards if I could.” Each time a fairy uses a unique saying, the saying is explained, which alleviates any confusion. Fans of Peter Pan will enjoy getting a fresh look at Tink, who has talent at fixing things. However, some readers may be disappointed that Peter Pan doesn’t appear in the story.

Even though the characters and plot are not well-developed, the foray through Never Land is interesting. The story shows how each girl and fairy is uniquely different, and each one has their own talent. The one negative aspect of the story is that Kate receives no consequence for sneaking out at night and stealing fairy dust. Instead, she is quickly forgiven; the queen tells the girls, “You are always welcome in Pixie Hollow.”

In a Blink has ten short chapters. While the short chapters and illustration make the story accessible to readers, younger readers may need help with the vocabulary. Cute black and white illustrations appear every 1-4 pages, which helps bring the fairy magic to life. The illustrations show the character’s emotions; readers will see the girls’ wonder as well as Kate’s frustration at not being able to fly. In a Blink is perfect for younger readers who want to add a sprinkle of fairy dust to their reading.

“This was the trouble with being a fairy who fixed things. Other fairies came to her with all kinds of problems, and not all of them involved pots and pans,” Tink. –In a Blink