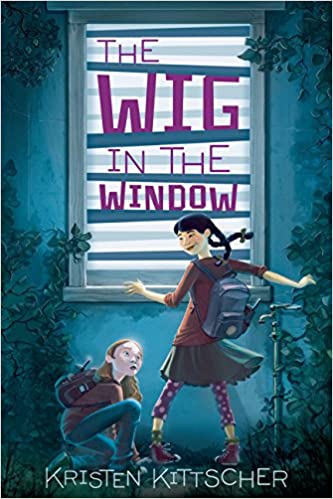 “Are there leaps in your logic? You can trust instincts when you first develop your hypotheses. But remember to be open to change if you find contrary evidence. Until several different avenues of evidence support it, you know nothing for sure. Always question your assumptions,” Ms. Gant. –The Wig in the Window

The Wig in the Window

Sophie Young and Grace Yang are best friends, seventh graders, and wannabe spies. The town of Luna Vista is quite boring, so they make a game out of spying on their neighbors. They even have a map of who and who not to spy on. But their game quickly becomes serious.  On one of their midnight stakeouts, they stumble across a terrifying scene at the home of their eccentric yet demure middle-school counselor Dr. Agford (also known as Dr. Awkward). The school counselor is hacking away at what appeared to be a piece of human flesh. Even though they are proven wrong about what Dr. Agford was chopping, the girls are still convinced that Dr. Agford is hiding a dangerous secret—and are determined to find out what it is.

Sophie and Grace attempt to uncover more about Dr. Agford, but Dr. Agford effortlessly evades the girls’ efforts to trip her up. Dr. Agford, as a respected adult, easily inserts herself into Sophie’s life. She slowly changes the girls’ neighborhood watch into a serious game of cat-and-mouse. As their investigation heats up, Sophie and Grace crack under the pressure. Their friendship, along with their investigative skills, are put to the test.

The narrative squarely focuses on Sophie’s perspective. This point of view helps the reader understand the workings of Luna Vista Middle School and Sophie’s personal life. Older readers will relate to the book’s portrayal of middle school, as the story is realistic in depicting Sophie’s thoughts about her classes, peers, and teachers. Like any preteen, Sophie also openly talks about her obsession: hers is Chinese culture, more so since Grace is Chinese American. Sophie gets “carried away with the traditional Chinese practice of feng shui . . . the idea that you can arrange your space to bring good luck and positive chi” and she takes the teachings of philosopher Sun Tzu as fact. This is notable when Sophie uses Sun Tzu’s tips about deception (when you are near, you must pretend you are far) to make sure she doesn’t reveal any information to Dr. Agford.

The story also covers cultural appropriation and interracial friendships, which is a point of conflict between Sophie and Grace’s relationship. Sophie dislikes that Grace is seemingly unengaged in Chinese culture, and Grace hates that Sophie practices activities relevant to Chinese culture without knowing their cultural significance. Grace accuses Sophie of “being superficial” because she talks about Sun Tzu, arranges her room with feng shui in mind, and practices kung fu. Sophie is performative in her adoration of Chinese culture. To Grace, Chinese culture is who she is. While Sophie never understands its importance to Grace, the two friends make up, but Sophie doesn’t move past her surface-level understanding of Grace’s culture. Through their exchanges, readers will learn the importance of being considerate of other’s cultures.

The Wig in the Window is a suspenseful yet fun story that focuses on relationships between authority figures and friends. The suspense comes from the girls avoiding Dr. Agford’s wrath, as she has a lot of sway in the community. Sophie’s narration about the school and the town gives the story a humorous and light tone. There is some name-calling that is typical of middle schoolers bad-mouthing each other, such as when Sophie’s classmates purposely mispronounce her French name as “AY-NUS” instead of “AN-YES.”

The consequences for the girls’ crimes—spying on their neighbors and breaking-and-entering—are nonexistent for the sake of the plot. Any adults that could stop the girls from investigating criminal activity are equally absent. Still, this book has lessons about appreciating other cultures and a good portrayal of interracial friendship, alongside the masterful way the girls uncover the mystery surrounding Dr. Agford. If readers enjoy the game of cat-and-mouse between Dr. Agford and the girls, and the girls’ friendship, then they should consider reading the City Spies Series by James Ponti.

“Are there leaps in your logic? You can trust instincts when you first develop your hypotheses. But remember to be open to change if you find contrary evidence. Until several different avenues of evidence support it, you know nothing for sure. Always question your assumptions,” Ms. Gant. –The Wig in the Window