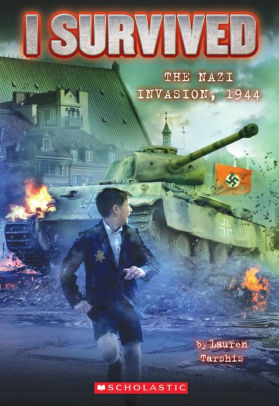 “The Nazis want to take everything from us. Do not let them take away hope,” Aunt Hannah. –I Survived the Nazi Invasion, 1944

I Survived the Nazi Invasion, 1944

When Nazi soldiers occupy Poland, Max and his family are taken to a ghetto. Soon, Max’s father is taken away in a cattle car. Left on their own, Max and his sister Zena must rely on each other in order to survive. With barely enough food to eat, the siblings make a daring escape from Nazi soldiers and hide in the nearby forest.

I Survived the Nazi Invasion focuses on how the resistance fighters helped defeat the Nazis. Tarshis uses kid-friendly descriptions to show the Nazis’ brutality. Even though the descriptions are not graphic, the story shows several people dying, which may upset younger readers. In order to survive, Max remembers the Biblical story of David and Goliath, which gives him bravery and hope.

When the Nazis arrive in Max’s town, Max is surprised that some of the townspeople begin to treat the Jews badly. Max’s father tries to explain the townspeople’s behavior by saying, “They have small minds… Jews are different. And some people are suspicious of what they don’t understand.” However, the story doesn’t only show the ugly side of humanity. Instead, it also shows people’s kindness.

Even though Max and his family are able to go to America after the war, Max realizes that “The Nazis had wounded him in other places, too, places he couldn’t see. In his heart. In his mind. He had scars there, too. And he would carry those scars with him for his whole life.” Even though the Holocaust was a time of suffering, Max’s story also shows that some people risked their lives to help Jews as well as the bravery of the partisans. Most of all, Max’s message is to never lose hope.

The story is accessible to all readers because Tarshis uses short paragraphs and simple sentences. Realistic black and white illustrations are scattered throughout the story and will help readers visualize the events. The story also shows people working together to defeat the Nazis. While the story weaves interesting facts throughout, the book also ends with more facts about the Holocaust. The I Survived series gives readers a glimpse into deadly situations without including scary details. Each book is told from a young person’s point of view, which will help readers connect with the narrator.

The conclusion shows Max’s family reuniting during the war, which is unrealistic. While some of the events are too convenient to be believable, the suspense will keep readers turning the pages. Readers who want to learn more about World War II should read Survival Tails: World War II by Katrina Charman. Older readers who are ready for a more in-depth World War II story should read Resistance by Jennifer A. Nielsen.

“The Nazis want to take everything from us. Do not let them take away hope,” Aunt Hannah. –I Survived the Nazi Invasion, 1944