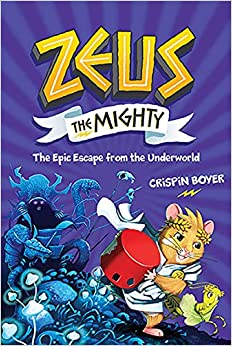 “The Oracle said only those ‘nimble, cunning, resilient, and strong enough’ could reach Hades’s throne room. We definitely have the right stuff,” Demeter. –The Epic Escape from the Underworld

The Epic Escape from the Underworld

The gods of Mount Olympus Pet Center are ready to bust out of their habitats and find their next mythological mission. But as it turns out, the newest threat to ancient Greece—an all-seeing monster from another realm—sneaks up on them!

Now Zeus the hamster, Athena the cat, Demeter the grasshopper, Poseidon the pufferfish, Ares the pug, and Hermes the chicken, all face a daring quest that takes them deep into the mystifying world of the Underworld, a realm where nothing is as it seems. Will Zeus and his team succeed on their most otherworldly adventure yet?

In The Epic Escape from the Underworld, everyday objects become relics and monsters of ancient Greece. Boyer uses imagination and comedy to bring Hades and the Underworld to life. A high-action plot, humorous situations, and black-and-white illustrations blend to make a fun series that will keep readers turning the pages. Each illustration shows the Greek gods, which gives the reader a visual and helps them understand the plot and the gods’ emotions. Large illustrations appear every one to five pages.

Readers who aren’t familiar with Greek Mythology will easily understand the book because the pet store owner listens to a podcast called “Greeking Out.” This podcast about Greek myths gives the reader a quick lesson on the mythology that is necessary to fully appreciate the book. Despite this helpful intro, the Olympians do meet a lot of characters, which may confuse some readers, especially since some of the new characters are not mentioned in the podcast.

The fourth installment of the Zeus the Mighty Series has lots of laughs and shows the importance of teamwork. Each Olympian completes a different task based on their strongest traits. Without relying on each other, the Olympians would not have been able to complete their quest. In addition, the book briefly explores the idea of a democracy. The Epic Escape from the Underworld is another fun-filled story that will keep readers flipping the pages. The story ends with more information about myths, the Olympians, Hades, and the Underworld. Readers who love action-packed, humorous stories should also check out Knights vs. Dinosaurs by Matt Phelan.

“The Oracle said only those ‘nimble, cunning, resilient, and strong enough’ could reach Hades’s throne room. We definitely have the right stuff,” Demeter. –The Epic Escape from the Underworld