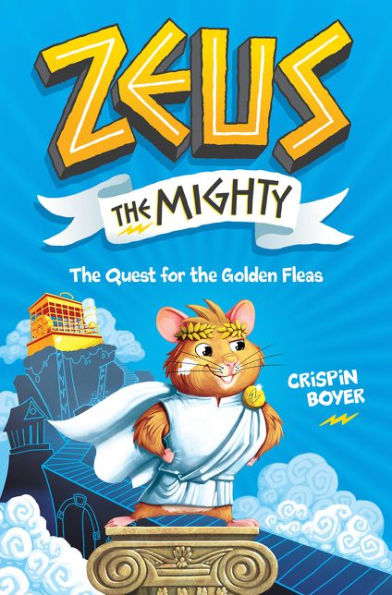 “Names are meaningless. It takes more than a name to prove yourself worthy to rule,” Poseidon. –The Quest for the Golden Fleas

The Quest for the Golden Fleas

Welcome to Mount Olympus, a pet supply and rescue center that sits high on a hill in Athens, Georgia. By day, the overconfident hamster Zeus, wise cat Athena, proud pufferfish Poseidon, loyal grasshopper Demeter, and treat-loving pug Ares are under the watchful eye of their caretaker, Artie, who is obsessed with Greek history. Her favorite podcast, “Greeking Out,” so enthralls her pets with its legendary tales of heroes and heroines that they believe themselves to be the actual megastars of mythology!

Under the cover of nightfall, this gang of gods pursues quests bestowed upon them by the magical, all-knowing Oracle of Wi-Fi. From an accidental plunge into a raging whirlpool (a toilet), to an epic voyage aboard the Argo (a robot vacuum), join Zeus and his minions in this romp through Greek mythology.

The Quest for the Golden Fleas is a strong start to the Zeus The Mighty Series. The hamster Zeus’s arrogance and desire to prove his worth gets him into hilarious situations. Readers will laugh when Zeus and the other Greek gods find wonder and danger in everyday objects. For example, when Zeus and his friends inspect the contents of a purse, they are amazed by the “artifacts” and believe “this relic is surely enchanted.” Similar to the ancient Greek gods, Zeus and Poseidon often disagree, which adds suspense and humor to the story.

Zeus is convinced that finding the golden fleas will prove he is worthy of ruling Olympia. While Zeus looks for the golden fleas, he abandons Demeter, who is being chased by a dragon (an iguana). All of the danger comes to life in black and white illustrations that excellently show the emotions of all of the animals. The illustrations show Athena racing through the store on a robot vacuum and bats chasing Zeus as he wields his shield (a tape measure) and blasts the bats with torchlight (a flashlight). While much of the plot is humorous, Zeus learns an important lesson—friendship is more important than a “furry old Fleece.”

While readers may not understand all of the references to Greek Mythology, the non-stop action will keep readers entertained. Zeus and the other gods are all completely different in a loveable way. The unique story combined with the funny illustrations will appeal to young readers. The Quest for the Golden Fleas will spark readers’ interest in Greek Mythology. The back of the book gives historical information about the Greek gods and The Myth of Jason and the Argonauts. For more humorous mythology, readers should add the Odd Gods Series by David Slavin & Daniel Weitzman to their must-read list. For readers who desire a more action-packed mythological story, the Underworlds Series by Tony Abbott will keep you at the edge of your seat.

“Names are meaningless. It takes more than a name to prove yourself worthy to rule,” Poseidon. –The Quest for the Golden Fleas