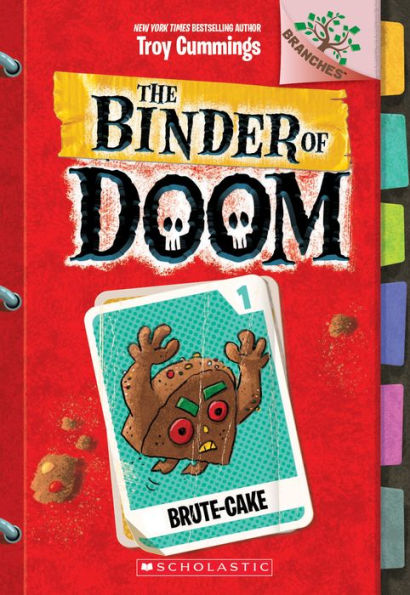 “Looks like the S.S.M.P. is back in business! Everything may be different now. But maybe that’s not such a bad thing,” Alexander. –Brute-Cake

The Binder of Doom #1

With no monsters to fight, Alexander and his friends have drifted apart. The Super Secret Monster Patrol used to protect the town from monsters. Without monsters, Alexander is dreading summer vacation. In order to keep Alexander busy, his father has signed him up for a summer camp at the library.

But then Alexander starts finding super creepy monster cards. He’s convinced that the monsters are back, but Rip and Nikki don’t believe him. When Rip invites his friends over to see his new house, the kids decide to explore the attic. When a brute-cake jumps out of a can, the friends know that they must fight the monster together.

Fans of The Notebook of Doom Series will look forward to reading about the S.S.M.P.’s return. The same monster-fighting friends come together to fight new, non-scary monsters. Instead of having a Notebook of Doom to explain the monsters, Alexander keeps finding monster cards that have important information about each monster. Each card is illustrated on one page and has pictures of the monsters, their habitat, their diet, and more exciting information.

Even though the brute-cake wants to turn other monsters into statues, the spooky scenes are more funny than scary. Every page has large, black-and-white pictures that bring the action to life. The large text is comprised of short sentences and easy vocabulary. The Binder of Doom is a companion series; however, readers who have not read The Notebook of Doom will be able to understand Brute-Cake’s plot. The story’s dialogue and use of onomatopoeias make Brute-Cake a great book to read aloud. Full of friendship, mystery, and a funny fighting fruitcake, Brute-Cake will be devoured by independent readers. Readers who like monsters and adventure should add The Yeti Files by Kevin Sherry to their reading list.

“Looks like the S.S.M.P. is back in business! Everything may be different now. But maybe that’s not such a bad thing,” Alexander. –Brute-Cake