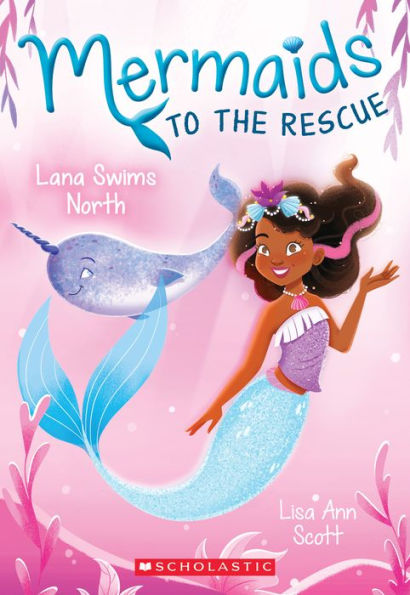 “Everyone feels scared once in a while. But you have so many great ideas, you have to share them,” Marina. –Lana Swims North

Mermaids to the Rescue #2

Princess Lana is excited to be learning at the Royal Mermaid Rescue Crew School, but she finds it hard to speak up in class, even when she knows the answers. She doesn’t have this problem with her friends. When she’s with them, the words come easily. But when her teacher asks her a question, she’s too frightened to speak.

Then Lana meets a horned creature named Spike, who has never seen a creature like himself. With Lana’s help, Spike discovers he’s a narwhal. Lana promises to help Spike find other narwhals. When they swim to the north, Spike finds his long-lost family and Lana finally finds the courage to speak up.

Lana’s story takes the reader inside of Lana’s home, to the surface where she meets humans who attend the Enchanted Pony Academy, and to the colder waters in the north. Lana’s family and friends encourage her to help Spike. In return, Lana convinces Spike that his dolphin friends and family should know where he is—even if they aren’t alike, they still care about each other. The characters display positive communication skills.

Lana helps Spike solve his problem. This allows Lana to understand that she can be a leader. She realizes, “I like spending time thinking, solving problems. It’s what I’m good at.” Lana recognizes that her skills would make her better at “solving problems that aren’t emergencies.” Even though Lana doesn’t think quickly on her feet, she can still be a helpful member of the Rescue Crew.

Lana Swims North will entertain those who have already transitioned to chapter books. Cute black-and-white illustrations help break up the text and appear every 3-5 pages. Although the vocabulary isn’t difficult, the text-heavy pages and long sentences may be overwhelming for beginning readers. Even though the mermaids look different on the cover, in the illustrations inside the book the mermaids look very similar. Lana and her family are the only characters that have dark skin and dark hair.

Any reader who has a difficult time speaking up in class will relate to Lana. As Lana travels to the north, readers get a glimpse of various sea creatures, including turtles, walruses, dolphins, and even a polar bear. Lana Swims North takes readers on a fun underwater adventure that teaches the importance of teamwork.

The Mermaids to The Rescue series does not need to be read in order because each book focuses on a different mermaid princess. However, readers may want to read Scott’s Enchanted Pony Academy Series first because Lana visits the school during her travels.

“Everyone feels scared once in a while. But you have so many great ideas, you have to share them,” Marina. –Lana Swims North