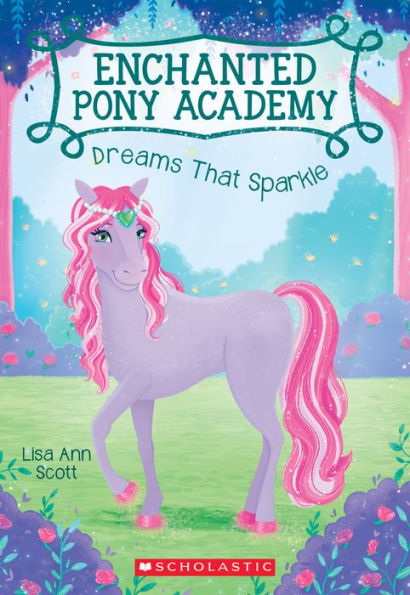 “I’m sorry that I judged you without knowing you,” Belissima. –Dreams That Sparkle

Belissima is the prettiest pony at the Enchanted Pony Academy — everyone says so. The problem is, no one seems to see what else Belissima is: talented and hardworking. She dreams that someday everyone will see that her magic doesn’t have anything to do with her looks! When the royal children come to the Academy for the selection ceremony, Belissima is determined to show that she’s not just a pretty pony. It’s her last chance to prove that she can be so much more than a show pony.

Belissima is upset that people always make comments about her beauty. She wishes someone would notice that “she had the top grades in her class, or that she was a leader who always tries to be patient and pleasant with all the ponies at school.” Belissima even tries to hide her beauty because she is afraid that a royal child will choose her based on her looks and not on her personality. This story teaches that ponies (and people) have many aspects that make up his/her personality.

The students use the Magic Treats and Eats Cookbook to make some magical treats, which add some humor to the story. However, the story has little action and mostly focuses on Belissima’s attempts to hide her beauty. Some readers may have a hard time understanding Belissima’s conflict. Although Belissima finds her perfect match in the end, the two rarely interact. Unlike the previous books, this story has less action and the message is harder to understand.

Dreams that Sparkle will entertain those who have already transitioned to chapter books. Cute black and white illustrations help break up the text and appear every three to five pages. Although the vocabulary isn’t difficult, the text-heavy pages and long sentences may be overwhelming for beginning readers. Fans of the Enchanted Pony Academy books will enjoy the story. The Enchanted Pony Academy series does not need to be read in order; however, readers new to the series should begin with Let It Glow or Wings That Shine.

“I’m sorry that I judged you without knowing you,” Belissima. –Dreams That Sparkle