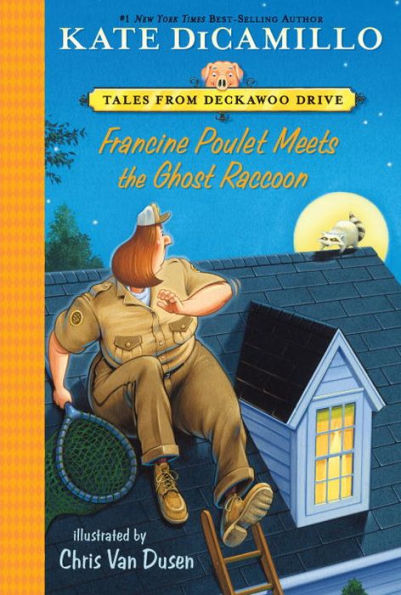 Other books by Kate Dicamillo

But the raccoon is still on the loose, and the folks on Deckawoo Drive need Francine. Can she face her fears, round up the raccoon, and return to the ranks of animal control?

While not everyone has faced a ghost raccoon, everyone will be able to relate to Francine’s fear. While chasing the raccoon, Francine is injured. After failing to catch the raccoon, Francine “didn’t know who she was. She was not an animal control officer. And she was not a Poulet, because Poulets never panic.” It isn’t until Francine meets Frank, a talkative child, that she faces her fears.

Francine Poulet Meets the Ghost Raccoon tells a humorous tale that highlights the importance of overcoming one’s fears. At one point, Francine quits her job because of her fear. Like Francine, readers may need help and encouragement to face their fear. When Francine tracks down the ghost raccoon, she gains confidence in her abilities, which allows her to overcome her fear.

The Tales from Deckawoo Drive Series uses the same humor and characters as Dicamillo’s Mercy Watson Series. While this story focuses on Francine Poulet, each character is unique and interesting. Unlike many books, Francine Poulet Meets the Ghost Raccoon shows a wide range of people—some are old and wrinkled, some are heavy set, and one is a pig. The people in the story are similar to the people you would find in your neighborhood. Despite their differences, they have a sense of community and sit around the kitchen table to share a snack of toast.

Francine Poulet Meets the Ghost Raccoon is a wholesome and entertaining story that shows the importance of facing your fears. The interesting characters, a ghostly animal, and sweet conclusion will appeal to many readers both young and old.

Other books by Kate Dicamillo