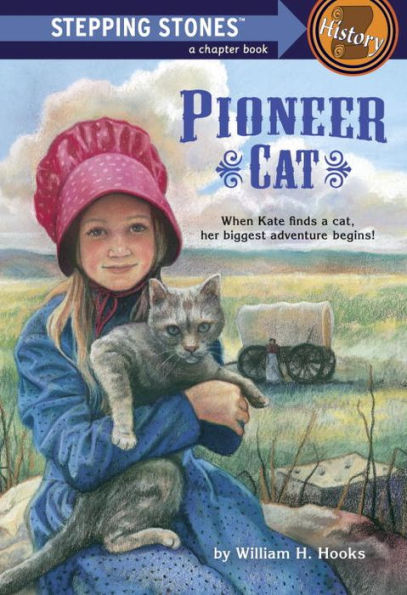 “Your Pa’s got itchy feet. He’s a traveling man. He’ll keep moving west till we run out of land, I reckon,”  Ma. ―Pioneer Cat

Nine-year-old Kate doesn’t want to go on a wagon train. She’s upset about leaving her best friend. She’s worried about how long the trip will be. And she’s afraid someone will discover her cat Snuggs, who is hiding in the wagon. Kate knows pets aren’t allowed on the wagon train, but she can’t bear the thought of leaving Snuggs behind.

This first-person narrative has just the right amount of action and suspense for younger readers. The dangers of the Oregon Trail are described in a kid-friendly manner that adds suspense without including scary details. Short chapters, black-and-white illustrations, and dialogue help make Pioneer Cat an entertaining and easy-to-read story. The fast-paced storyline teaches about the hardships of moving to the west.

Pioneer Cat has many positive elements. Rosie, Kate’s friend on the trail, exhibits the true qualities of a good friend and speaks in fun idioms such as, “looks like a choice bowl of beans to me.” Kate’s parents are shown in a positive light and clearly care about their children. At one point in the story, Kate could have easily allowed her parents to believe a falsehood, but she tells them the truth instead. Many will pick up Pioneer Cat because of the cute cat on the cover, but they will continue reading because of Kate’s adventures and the other loveable characters in the story.

“Your Pa’s got itchy feet. He’s a traveling man. He’ll keep moving west till we run out of land, I reckon,”  Ma. ―Pioneer Cat