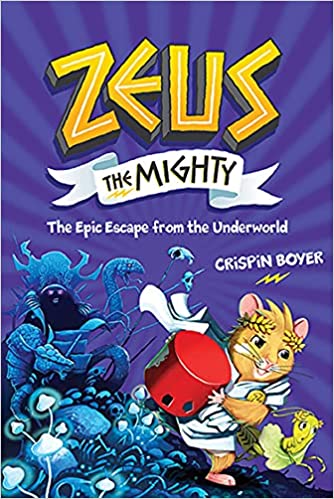 “You don’t know these sea monsters like I do,” Poseidon replied. “Today it’s camping. Tomorrow it will be throwing a beach party with Scylla and Charybdis and the sirens. Next we’ll be dealing with an entire sea-monster theme park.”–The Trials of Hairy-Clees

Zeus and the other gods at the Mount Olympus Pet Center are finally working together like a well-oiled machine. . . until they discover a multi-headed monster looming over Greece. And on top of that, a pesky new arrival is trying to join the Olympians.

It turns out defeating the monster is only one challenge on a long list of trials. Zeus and his team of gods—Athena, Demeter, Poseidon, and Ares—are facing their toughest quest yet. Even with some unexpected help from a feathered friend, can they succeed? Or have Zeus the Mighty and his Olympians met their match?

The Trials of Hairy-Clees mixes Greek Mythology, animals, and plenty of mayhem into an entertaining story that will have readers laughing out loud. In the third installment of the Zeus the Mighty Series, Hermes (a hen) makes a spectacular entrance. From the start, Ares (a pug) wants to help Hermes, because of her bravery. In a desperate attempt to get Hermes to leave, Zeus tells the hen that she can’t be an Olympian because she’s not immortal. Unfazed, Hermes is determined to complete the labors of Heracles, become immortal, and join the Olympian flock.

Readers who aren’t familiar with Greek Mythology will easily understand the book because the pet store owner listens to a podcast, “Greeking Out,” about the Greek myths; this allows the reader to get a quick lesson on the mythology that is necessary to fully appreciate the book. The book’s plot parallels the information given in the podcast, which helps readers understand key events.

In The Trials of Hairy-Clees, everyday objects become the relics and monsters of ancient Greece. For example, the animals believe a misting fan is the Hydra, a snake with many heads. The high-action plot, humorous situations, and black and white illustrations blend to make a fun series that will keep readers turning the pages. Each illustration shows the Greek gods, which gives the reader a visual and helps them understand the plot and the gods’ emotions. Plus, large illustrations appear every one to five pages.

In the end, Hermes plays a vital role in defeating the Hydra and even Zeus admires Hermes’ bravery and determination. After Hermes’ brave deeds, the Olympians decide to help Hermes complete all Heracles’ labors, which will have readers eager to read the fourth book in the series, The Epic Escape From the Underworld. Readers who love humorous stories about brave characters should put the Zeus the Mighty Series at the top of their must-read list. For more humorous books that put a spotlight on mythology, check out the Odd Gods Series by David Slavin and The Unicorn Rescue Society Series by Adam Gidwitz.

“You don’t know these sea monsters like I do,” Poseidon replied. “Today it’s camping. Tomorrow it will be throwing a beach party with Scylla and Charybdis and the sirens. Next we’ll be dealing with an entire sea-monster theme park.”–The Trials of Hairy-Clees