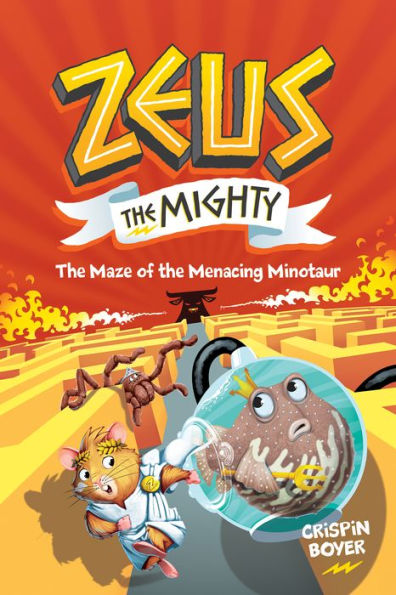 “You’re the king of the gods—you should be using your brains, not your brawn,” Phineus. –The Maze of the Menacing Minotaur

The Maze of the Menacing Minotaur

Zeus the Mighty and the gods of the Mount Olympus Pet Store are exhausted from the sweltering heat. In order to restore Greece to a cooler temperature, Zeus and Poseidon team up to defeat the menacing Minotaur. As Zeus and Poseidon argue their way through the Minotaur’s Maze, they meet an unlikely ally. However, the minotaur isn’t the only threat. The bully Sinis, a Harpy, and the soothsayer Phineus all want to teach Zeus a lesson. Is there any way Zeus and Poseidon can work as a team and make it out of the maze alive?

Join Zeus the hamster, Athena the wise cat, Demeter the loyal grasshopper, Poseidon the proud pufferfish, and Ares the treat-loving pug on their newest adventure.

In The Maze of the Menacing Minotaur, everyday objects become the relics and monsters of ancient Greece. Boyer uses imagination and comedy to bring the myth of Theseus and the Minotaur to young readers. A high-action plot, humorous situations, and black and white illustrations blend to make a fun series that will keep readers turning the pages. Each illustration shows the Greek gods, which gives the reader a visual and helps them understand the plot and the gods’ emotions. Large illustrations appear every 1-5 pages.

The second installment of the series focuses on Zeus and Poseidon, who both want to call the shots. As the two learn to work together, they discover that the soothsayer Phineus is really Cronus, who wants to teach Zeus how to be a better ruler. According to Cronus, a leader should “delegate” instead of lead others on adventures. Cronus says, “Why, I had your minions running all over Greece, doing my bidding. And I didn’t have to lift a paw. That’s how you rule.” However, Zeus realizes that it is important to work as a team and allow others to make decisions.

The Maze of the Menacing Minotaur takes the reader on a fun adventure and introduces Greek mythology. Readers that are unfamiliar with Greek mythology will want to read the historical information about the Olympians, Theseus, and the Minotaur that appears at the end of the book.

The Zeus the Mighty series is perfect for young readers who aren’t ready to jump into The Percy Jackson series. The Maze of the Menacing Minotaur will not only have readers eager to read, but it will also spark their interest in Greek mythology.

“You’re the king of the gods—you should be using your brains, not your brawn,” Phineus. –The Maze of the Menacing Minotaur