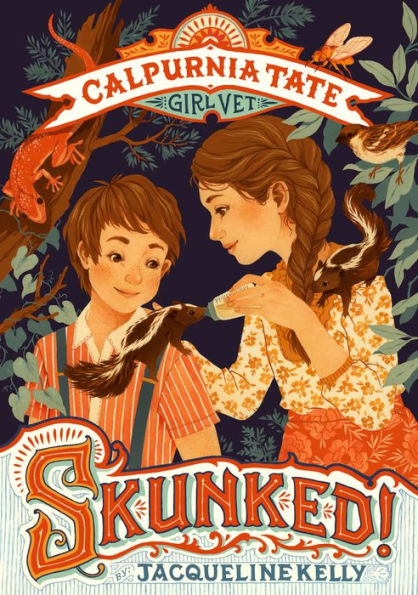 When softhearted Travis discovers an abandoned baby skunk, he can’t help but bring it home and take care of it. Stinky, as Travis names him, settles in pretty well. But when Travis discovers Stinky’s littermate, Winky, who is in need of some help, things get complicated around the Tate house. One skunk might skate by under the radar, but two is just asking for trouble. Will Travis and Callie be able to keep the critters away from their mother’s careful eyes and nose?

Travis has a kind heart and wants to help animals, and Callie just can’t say no to her younger brother. As the two siblings take care of two orphaned skunks, they have to deceive their parents, who wouldn’t approve of caring for skunks because they are a pest. Callie seeks out help from the local veterinarian who tells her how to nurse a “kitten” back to health. Having a hidden skunk causes some silly scenes. Since Skunked! is set in 1901, it has an old-fashioned feel in both the language and the illustrations.

Skunked! has black and white illustrations that show the siblings and many farm animals. The large illustrations appear every 1 to 4 pages and will help readers understand the story’s plot. The surprising conclusion will leave readers with a smile and a lesson on why skunks should not be treated as pets.

Skunked! is told from Callie’s point of view. Callie’s scientific mind, curiosity, and caring nature make her an extremely likable character. Even though she is not completely honest, her deception is to help her brother care for the two skunks. Because of the advanced vocabulary, younger readers will need help. However, the large text and short chapters make Skunked! a good book to read aloud to younger readers. Proficient readers will enjoy the animal action, the sibling relationship, and the surprising conclusion.