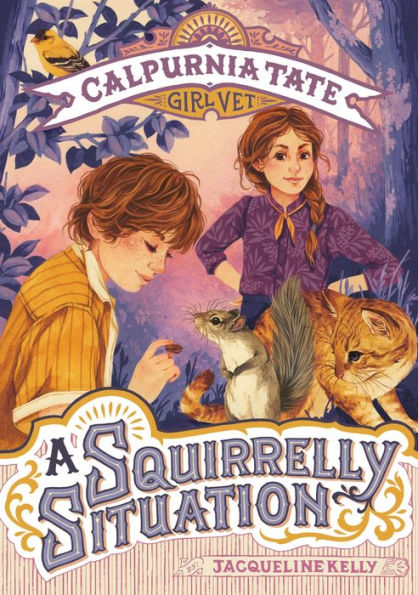 “Mother disapproved of eavesdropping, although I don’t know why. I myself have always found it to be a perfectly good way to gather information,” Calpurnia. –A Squirrelly Situation

When Travis finds an abandoned baby squirrel, he brings him home and names him Fluffy. Travis introduces Fluffy to his cat, and the cat welcomes the squirrel into her nest and begins to nurse the squirrel alongside her kitten. Soon, the kitten, named Thud, and the squirrel are running around the kitchen causing havoc.

Mother doesn’t think that Fluffy is such a great family pet, but she’s won over by Travis’s pleas. But when Fluffy is old enough to be put back in the wild, will Travis be able to say goodbye to his squirrelly friend?

Since A Squirrelly Situation is set in 1901, it has an old-fashioned feel in both the language and the illustrations. The story has black and white illustrations of the siblings and the adorable animals. Readers may want to hunt for the various animals are in each illustration. The large illustrations appear every 1 to 4 pages and will help readers understand the story’s plot. The story also has many interesting facts about squirrels.

Callie’s and Travis’s grandfather make a brief appearance and remind her of the importance of not jumping to the wrong conclusion. He says, “Keep in mind, Calpurnia, that there is no point in gathering information unless you are certain it is correct information.” The story also highlights the importance of forgiving others.

A Squirrelly Situation told from Callie’s point of view. Her scientific mind, curiosity, and caring nature make her an extremely likable character. The animals’ behavior and the hint of humor will keep readers interested until the very end. Because of the advanced vocabulary, younger readers will need help. However, the large text and short chapters make A Squirrelly Situation a good book to read aloud to younger readers. Proficient readers will enjoy the silly situations caused by the squirrel as well as the characters’ interactions.

“Mother disapproved of eavesdropping, although I don’t know why. I myself have always found it to be a perfectly good way to gather information,” Calpurnia. –A Squirrelly Situation