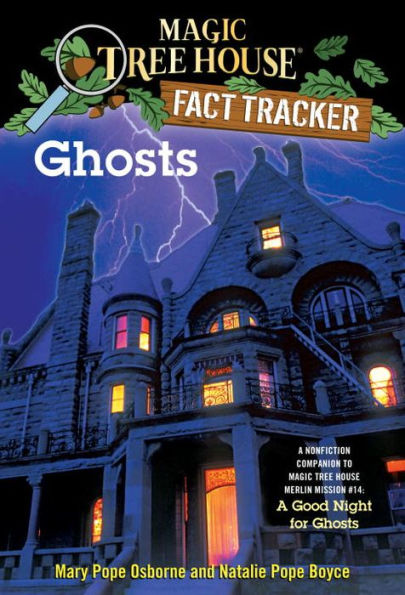 “We may not all agree on ghosts, but one thing is sure: ghosts are a mystery. Stories about them can be exciting, inspiring, and chilling.” –Ghosts

When Jack and Annie got back from their adventure in Magic Tree House Merlin Mission #14: A Good Night for Ghosts, they had lots of questions. What are some of the most famous ghost stories? Why do people believe in ghosts? Do most cultures have ghost stories? What are ghost hunters? Readers discover the answers to these questions and more as Jack and Annie track the facts.

Included in the book are haunted places, different cultures’ beliefs in ghosts, and famous ghost stories. Each chapter is broken into small sections that give historical information. Almost every page has a picture or illustration. The book includes historical pictures of the people and places discussed in the text. Black and white illustrations, which are sometimes comical, show the ghosts that haunt famous places. On the side of the text, additional historical information and definitions are given. For example, “The name yurei comes from two words: yu, which means ‘dim,’ and rei, which means ‘soul.'”

At the end of the book, Jack and Annie give a list of things they would do “if we were ghosts” such as “walk through walls, glow like candles, never take a bath,” etc. The book also includes a list of natural events that could cause ghostly fears, as well as ways to research.

Each ghost story is told in a conversational tone that explains who the ghost is and how they haunt. Even though the book is all about ghosts, none of the information is told in a dramatic or scary way. The text never tries to prove or disprove the hauntings. Instead, the book keeps to the facts and lets the reader decide if they believe in ghosts or not. Even if a reader doesn’t believe in ghosts, the book gives plenty of historical information which is presented in an entertaining manner.

Whether you’re a history buff or just interested in the supernatural, Ghost presents nonfiction information in a way that will engage young readers. Readers will learn about ghosts that appear in New Orleans, the White House, Great Britain, and other famous sites. Ghost is packed full of historical information that is fun to read; it also gives information that connects to A Good Night for Ghosts, a Magic Tree House Book. Even though the content is appropriate for younger readers, they may need help with the advanced vocabulary. If you’re researching ghosts or just want a fun book to read, Ghost will allow you to explore the world of ghosts without any frightening surprises.

“We may not all agree on ghosts, but one thing is sure: ghosts are a mystery. Stories about them can be exciting, inspiring, and chilling.” –Ghosts