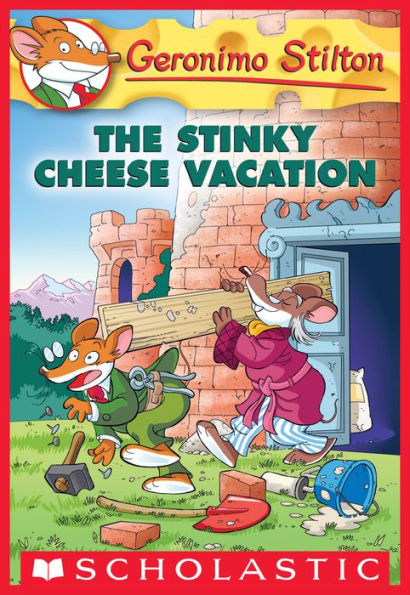 Other books by Geronimo Stilton

“In the end, it is true that when you are kind and generous to others, that spirit of generosity is returned to you when you least expect it!” Geronimo. –The Stinky Cheese Vacation

Geronimo gets a letter from Uncle Stingysnout, who needs to see him immediately. According to Uncle Stingysnout, he is about to leave this world and he would like Geronimo to fulfill his last request. Geronimo agrees to help by planting lots and lots of flowers. But then the next day, Uncle Stingysnout has another request and another. . .

Geronimo is put to work until Uncle Stingysnout’s entire house is fixed. But then he finds out that his uncle is not ill. Instead, his Uncle just wanted to have his house fixed up for free. After cooking, cleaning, painting, and planting, Geronimo discovers that Uncle Stingysnout plans on opening Hotel Stingysnout as a “five-cheese resort.”

Whether you are a Geronimo Stilton fan or a first-time reader, The Stinky Cheese Vacation will have readers giggling. The story uses a lot of cheese puns, such as when Geronimo says, “After all, my heart is softer than mozzarella, and I can be a real cheeseball.” However, the plot does not have much action or suspense. Unfortunately, Uncle Stingysnout shamelessly takes advantage of Geronimo’s generosity. In the end, Geronimo forgives his uncle for his dishonesty, but it is clear that Uncle Stingysnout will not change his greedy ways.

The Stinky Cheese Vacation’s layout will draw readers in with large, full-color illustrations that appear on every page. In addition to the often humorous illustrations, the large text has a graphic element that makes the words look fun. Some of the key words are printed in a larger, colored print. For readers who still struggle with reading, The Stinky Cheese Vacation would make a great book to read aloud while letting the child read the words that are in the colored print.

Other books by Geronimo Stilton

“In the end, it is true that when you are kind and generous to others, that spirit of generosity is returned to you when you least expect it!” Geronimo. –The Stinky Cheese Vacation