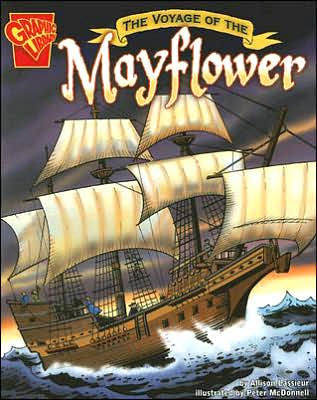 The Voyage of the Mayflower

The Separatists received funding from Mr. Weston. They booked passage on the Speedwell, but before leaving for the New World they traveled to England to meet up with the Mayflower. Their trip was besieged by many problems, and the sailors and the Separatists did not get along.

When the ships finally landed, they discovered they were in Massachusetts instead of Virginia. The harsh winter killed many of the settlers. Finally, in spring they met Squanto, a Wampanoag Indian who taught the settlers how to plant crops. With Squanto’s help, the settlers were able to survive in the New World.

The story is told in a graphic novel format that will appeal to even the most reluctant readers. Each page has 7 to 9 sentences. Basic facts appear in gray boxes and people’s speech appears in quote boxes. In addition, the characters’ thoughts appear in thought bubbles. At the end of the book, readers will find additional facts about the Mayflower, a small glossary, and a list of books and websites readers can use to further their knowledge.