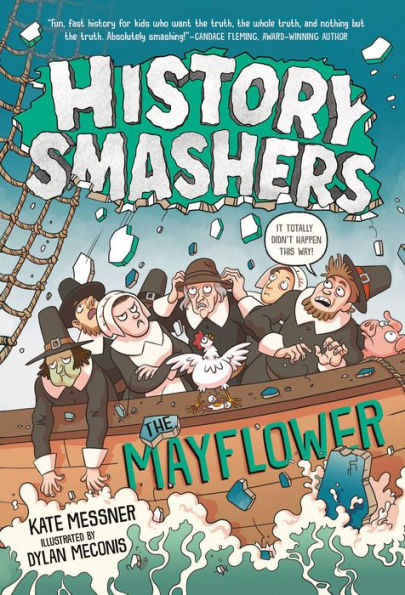 “Again, why is this important? Because to represent, by whatever means, any group as accurately as possible is to show respect. It shows respect for our people—both those of the past and those of today,” Linda Coombs. –The Mayflower

Myths! Lies! Secrets! Smash the stories behind famous moments in history and expose the hidden truth. Perfect for fans of I Survived and Nathan Hale’s Hazardous Tales.

In 1620, the Pilgrims landed at Plymouth Rock and made friends with Wampanoag people who gave them corn. RIGHT?

WRONG! It was months before the Pilgrims met any Wampanoag people, and nobody gave anybody corn that day.

Did you know that the pilgrims didn’t go straight from England to Plymouth? No, they made a stop along the way—and almost stayed forever! Did you know there was a second ship, called the Speedwell, that was too leaky to make the trip? No joke. And just wait until you learn the truth about Plymouth Rock.

Messner makes learning about history fun. The Mayflower is written in a factual, conversational tone that explains how some of America’s myths started. The Mayflower explains to readers what a primary source is, as well as discusses why “a primary source isn’t necessarily the truth of what happened; it’s an account of what the writer noticed and believed at the time.” The book contains many passages from primary sources and also translates some passages that are difficult to understand.

The Mayflower doesn’t recite a bunch of boring facts. Instead, readers will learn about the events and their significance. For example, the book explains what the Mayflower Compact was: “It established the idea that people should agree on laws together. It also laid the foundation for the separation of church and state—the idea that the government shouldn’t be run by religious leaders and shouldn’t tell anyone how to worship.”

The book’s unique layout will appeal to readers because it includes some graphic novel panels plus lots of illustrations, maps, sidebars, and historical pictures. Almost every page has a graphic element and many of the black and white illustrations are humorous. The illustrations will allow readers to visualize the people, places, and events while the abundant graphics break the text into manageable parts and help readers stay interested in each story.

The Mayflower starts with who the Pilgrims were and why they wanted to leave England. The book also includes information about traveling to the New World, the harsh conditions of settling an untamed land, and the Pilgrims’ treatment of the Wampanoag’s people. The Mayflower is a must-read book because it shows American history in a new light and explains how many of America’s myths became part of our history.

“Again, why is this important? Because to represent, by whatever means, any group as accurately as possible is to show respect. It shows respect for our people—both those of the past and those of today,” Linda Coombs. –The Mayflower