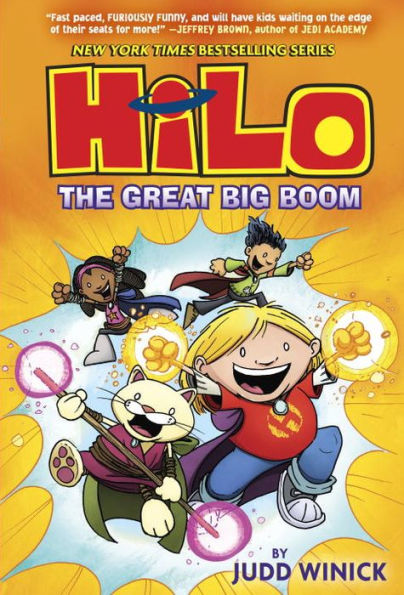 “It was just something small that made me see everything differently. I couldn’t help but be good,” –The Great Big Boom

When Gina disappears into a portal, no one knows where she is. But Hilo knows that friends don’t let friends disappear. Hilo and D.J. know they must find Gina and bring her home. They know jumping into a portal will lead them on a dangerous adventure, but they are determined to get Gina back. Can they find Gina and make it back to Earth before the portal closes?

Readers will fall in love with Hilo, the lovable living machine from another planet. The Great Big Boom takes readers on an epic adventure to a world where two clans have been battling for centuries. As Hilo searches for a way home, he struggles with regaining his memories. Hilo is afraid that he will discover that he is truly evil.

In the battle scenes, the characters spend more time running away than fighting and none of the characters are seriously injured. Hilo and D.J. go to “Oshun, the last magical planet” and find their friend Polly who loves to tell puns. Polly introduces Hilo and D.J. to a clan of fierce-talking cats. Readers will giggle at the sibling arguments and the silly antics of the Furback Clan.

Hilo’s story demonstrates how one person can make a positive impact on others. Hilo learns that a person can always change for the better and that past deeds do not have to define you. The Great Big Boom keeps readers entertained with mystery, fighting, magic, and wonderfully complex characters. At the end of the story, readers will be eager for Hilo’s next adventure, Waking the Monsters.

“It was just something small that made me see everything differently. I couldn’t help but be good,” –The Great Big Boom