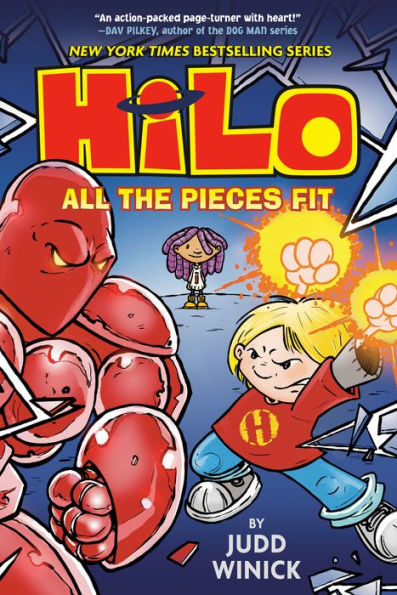 “My mom always says... what you do is what you’ll be and friends can help you find who you are,” D.J. –All the Pieces Fit

All the Pieces Fit

In book five, D.J. and Hilo traveled to Hilo’s home planet. In order to keep their activities secret, they left robot versions of themselves on earth. When government agents appear, they are determined to take D.J. and Hilo into custody. With the help of Gina and Polly, the secret agents end up running from the scene. However, now Gina’s parents discover the truth about D.J. and Hilo.

Being a hero isn’t easy. Hilo had no idea it would be this hard. Hilo came to earth because he was running from Razorwark. He’s done running. Razorwark has come to earth, and the time has come for one final face-to-face showdown. What happens will decide the fate of the robot world…and Hilo’s future. The sacrifice will be great but with Izzy’s help, Hilo finally knows what he has to do because THIS is how all the pieces fit.

Fans of the Hilo series will not be disappointed with the sixth installment of the series, which brings all of the characters together to fight Razorwark. All the Pieces Fit is a fast-paced story that contains many exciting battles. However, the fighting is broken up with humorous scenes, such as a hurricane of hamsters and a force field around the city. However, the philosophy about Hilo’s empatis will confuse some readers. However, the ending is surprising and shows how “we all have a purpose. We have a place we’re supposed to fit.”

All the Pieces Fit uses brightly-colored illustrations that keep the action moving. The detailed illustrations show exaggerated facial expressions, which will help readers understand the characters’ changing emotions. For maximum enjoyment, the stories should be read in order. Even though the first chapter recaps the events in the previous books, the stories’ plots build on each other.

Hilo is the perfect series for all ages. The sci-fi story shows the importance of friendship and sacrifice, and the heartwarming conclusion will leave readers smiling. Even though Hilo’s story is wrapped up, readers will be excited that the actions continues in Gina—The Girl Who Broke the World.

“My mom always says... what you do is what you’ll be and friends can help you find who you are,” D.J. –All the Pieces Fit