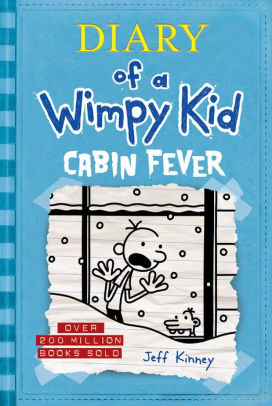 “Dad picked up some food on the way home, and the rest of us ate like a pack of wolves. And let me just say, I’ll never take food for granted again,” Greg. –Cabin Fever

Most people love the holiday season, but it makes Greg a nervous wreck. Greg believes that if he makes a mistake in the first eleven months of the year, it’s not a big deal, but if he does something wrong during the holiday season, then he’s in trouble with Santa and won’t get any presents. With Thanksgiving gone and Christmas fast approaching, Greg becomes obsessed with playing Net Kritterz online – a game where he takes constant care of his internet pet Chihuahua. Greg needs money in order to feed and clothe his virtual pet, but after his mom says money is tight, Greg has to create new ways to earn cash quickly.

After Greg’s request to his local church for a ‘donation’ and his snow shoveling business fall through, Greg and his best friend, Rowley, decide to hold their own Holiday Bazaar where they will sell concession snacks, offer holiday games, and make gifts like their school’s own Bazaar. However, after Vice Principal Roy stops them from handing out advertisements at school, the young duo decides to advertise their Bazaar by hanging signs on the outside school wall. But while taping them up, rain begins to pour and the paint on the signs runs, staining the bricks a neon green. With the police hot on their tails, Rowley and Greg flee the scene of the crime.

After the local newspaper carries a story about the vandalism and Vice-Principal Roy demands that the guilty parties come forward the next day, Rowley submits an anonymous note indicating that he and Greg are responsible for the vandalism. Refusing to identify Rowley as his partner in crime, Roy forces Greg to clean the outside bricks alone for hours. When Greg gets home, he learns the police have paid his house a visit and left a note saying that they would be back later. That night, a huge snowstorm traps Greg and his family inside their house. Greg now has to wait out the snowstorm while stressing about the police as his family’s food rations and electricity run out. Will Greg survive the snowstorm and get the chance to clear his name or will he be sent to jail like he fears?

Cabin Fever’s plot revolves around everything that happens in Greg’s life and is told from his 12-year-old perspective. The story contains a lot of bathroom and childish humor and at times the humor and illustrations can be crude and inappropriate for really young readers. At one point in the story, Greg clears a neighbor’s driveway of snow using a sprinkler and feels annoyed when his neighbor slips on the resulting ice. In another part, Greg tries to steal from the collection tray at church in order to pay for his Net Kritterz. Many illustrations also depict a butt, someone using a toilet, or Greg in his underwear.

Despite the book’s bathroom humor, Cabin Fever has positive lessons for young readers. Jeff Kinney has a natural talent for using humor to mask important messages. In this book, Kinney uses Greg and his humor to address gratefulness. When Greg was on the verge of losing everything – electricity, food, shelter, video games – while snowed in, he realizes how grateful he is for his family, friends, and home.  Greg teaches readers to be grateful for their families, friends, and everything else they are lucky to have. Also, the consistently funny black-and-white comic illustrations will help younger readers transfer their reading skills from picture books into full-fledged novels, helping even the most reluctant of readers start reading. Diary of a Wimpy Kid: Cabin Fever is a fun, easy-to-read story that will entertain readers and teach them to be grateful for their families and friends.

“Dad picked up some food on the way home, and the rest of us ate like a pack of wolves. And let me just say, I’ll never take food for granted again,” Greg. –Cabin Fever