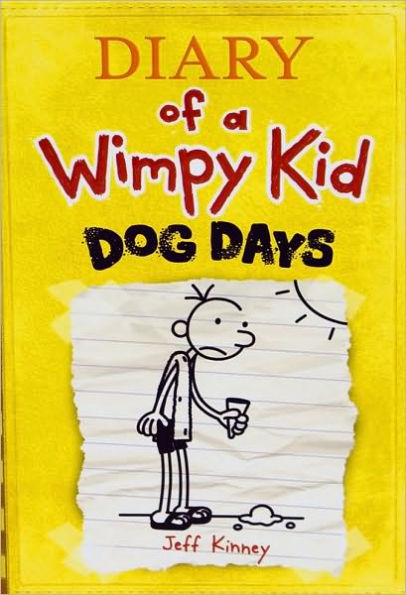 “Me and Dad might not have one of those close father-son relationships, but that’s fine with me. I’ve learned that there is such a thing as TOO close,” Greg Heffley. –Dog Days

The trials and tribulations of middle school life are temporarily over for Greg Heffley. As summer approaches, there are no bullies or classes to worry about. Greg is ready to kick back and enjoy junk food, TV, and video games. However, after his summer vacation is canceled, a three-month guilt trip starts for Greg. Greg now has to put up with his mom’s constant demands to go outside and read a book, his dad and his “bonding” experiences, a terrible birthday party, a new dog, and a fight with his best friend, Rowley. How will Greg survive?

Written in Greg’s own journal, the conflict of Diary of a Wimpy Kid: Dog Days revolves around everything that happens in Greg’s life. It is written from his 12-year-old perspective. The story contains a lot of bathroom and childish humor. At one point in the story, Greg, who is almost naked, has to chase after his dog. At another point in the story, Greg has to save his younger brother, Manny, before he accidentally washes his hands in the urinal.

Greg Heffley is a well-developed and relatable character for young audiences. Although Greg is lazy, petty, narcissistic, and cowardly, he does have moments of kindness. Greg will show readers the importance of sharing and thinking of others. He even points out some of the flaws in his own terrible behavior, showing kids that procrastinating and sleeping all day isn’t worth it. The consistently funny black-and-white illustrations, which look more like a comic strip than a highly illustrated graphic novel, help break up the text and keep even the most reluctant readers engaged.

Greg’s perspective is often pessimistic and at times can be downright mean. Greg demonstrates qualities, such as laziness and selfishness, that parents would not want their children to emulate. However, the story has relatable conflicts and shows readers the different perspectives of children and parents. Greg’s behavior could lead to a good discussion between parents and children about how people should act. Readers do not have to read these books in order to enjoy them. The fun, easy-to-read story will teach valuable and practical lessons to readers. Despite the childish humor, Diary of a Wimpy Kid: Dog Days will entertain readers and have them laughing out loud.

“Me and Dad might not have one of those close father-son relationships, but that’s fine with me. I’ve learned that there is such a thing as TOO close,” Greg Heffley. –Dog Days