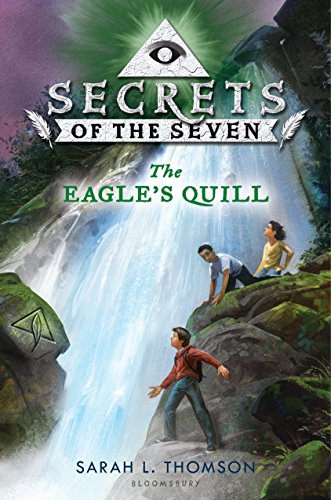 “What kind of girl was Abby, who could break a bad guy’s wrist with one kick? What kind of place was Caractacus Ranch, with a secret hideout straight out of James Bond?” Sam. –The Eagle’s Quill

The Secrets of the Seven #2

After barely escaping Death Valley, middle school geniuses Sam, Martina, and Theo head to Glacier National Park to find the second of seven artifacts—keys that unlock a secret weapon—left by the country’s Founding Fathers. The clues lead them to look for Thomas Jefferson’s Eagle’s Quill at a Montana ranch on the outskirts of Glacier National Park.

But the dangerous Gideon Arnold, a descendant of the infamous Benedict Arnold, is hot on their trail—or is he one step ahead? Gideon Arnold takes the kids’ chaperone and the ranch owners hostage until the kids deliver the quill. Can Sam, Martina, and Theo, with the help of rancher girl Abby, find a way to save everyone without handing over Jefferson’s artifact? They enter the wilderness to solve riddles and escape traps that have protected the quill for generations…but if they find it, can they keep it away from Arnold?

Arnold captures the kids’ chaperone and Abby’s parents, leaving the kids to follow Thomas Jefferson’s clues alone. Readers will have fun trying to decipher Jefferson’s words; the first clue is a compass that is engraved with “in matters of style, swim with the current. In matters of principle, stand like a rock.” Throughout their journey, Sam relates the founding of America to chess. For example, he thinks, “The important thing about chess wasn’t how powerful you were. It was all about where you were standing and who you were standing with.”

Throughout the story, readers will learn some facts about Thomas Jefferson, who wrote “all men are created equal.” However, the story doesn’t portray Jefferson as perfect. While he was pivotal in helping form America’s government, he also “owned slaves. He’d kept his own children as slaves. And it had probably never occurred to Jefferson, that women—like Marty and Abby, would grow up to be—would like to be considered equal too.” The text is never judgmental of Jefferson, but instead uses a factual tone that will leave readers thinking about some of the unjust aspects of colonial America.

The Eagle’s Quill introduces Abby, who is an interesting addition to the cast of characters. The story is not as fast-paced as the first book in the series, The Eureka Key, because the kids are not being chased by villains. Instead, they are navigating Glacier National Park and running from wild animals. Plus, some of the founder’s traps are unrealistic. Despite this, The Eagle’s Quill draws the reader into the kids’ conflicts and will have them trying to solve the clues. The ending has a surprise twist that will have readers excited to read the last book in the series, Ring of Honor.

“What kind of girl was Abby, who could break a bad guy’s wrist with one kick? What kind of place was Caractacus Ranch, with a secret hideout straight out of James Bond?” Sam. –The Eagle’s Quill