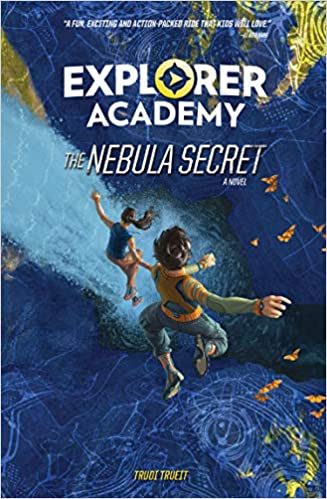 “Opportunity comes in many forms. It’s not how you get it that matters but what you do with it,” Taryn. –The Nebula Secret

Adventure, danger, and a thrilling global mission await 12-year-old Cruz Coronado as he joins an elite school for explorers.

Cruz leaves his tranquil home in Hawaii to join 23 talented kids from around the globe to train at the Explorer Academy with the world’s leading scientists. Their goal is to become the next generation of great explorers.

But for Cruz, there’s more at stake. The moment he arrives at the Academy, he discovers his family has a mysterious past with the organization that could jeopardize his future. In the midst of codebreaking and cool classes, new friends and augmented-reality expeditions, Cruz must tackle the biggest question of all: who is out to get him … and why?

The Nebula Secret focuses on Cruz, but the third-person narration allows readers to get a glimpse into other characters as well. Due to the large cast of characters, Cruz is the only character that has any depth. As far as the other academy students, most of them are only introduced briefly and readers will have to pay close attention to remember all their names.

Cruz’s conflict is multifaceted. Someone is trying to kill him, but Cruz doesn’t know who or why. This makes it difficult for Cruz to know which students and teachers to trust. In addition, Cruz’s mother left him clues to decode. The questions behind Cruz’s mother’s death add to the mystery. Plus, the story is interspersed with suspense and high action that keeps readers entertained until the very end.

The Explorer Academy has high expectations for the students. Despite this, making mistakes is seen as a learning opportunity. While students’ grades are important, getting an A isn’t the priority. Instead, the school encourages integrity, honesty, and compassion. Furthermore, teachers reinforce the importance of teamwork and often require students to work with their classmates. No one is expected to be a perfectionist. In the end, this theme is reinforced when one student’s desire to be perfect leads to him being expelled.

The Nebula Secret combines a well-written story with maps and illustrations that appear every two to twelve pages. Many of the illustrations are a mix of photographs and drawings, which give the pictures a touch of realism. Another positive aspect of the book is that famous people and places are mentioned, including the Monarch Butterfly Biosphere Reserve and Nellie Bly, who said, “Energy rightly applied and directed will accomplish anything.” These references may spark readers’ interest to learn more about these people and places. Plus, the book includes a section titled The Truth Behind the Fiction; these pages combine pictures and short blurbs on people mentioned in the book who have interesting jobs.

Unfortunately, the conclusion of this story isn’t believable. Instead of wrapping up the story thread, Cruz learns that his mother has left more clues that will lead him to a formula that she invented. Even though Cruz’s mother knew it would endanger her son’s life, she left him these clues that only he can follow. To make matters worse, Cruz will have to find eight different locations to piece the formula together. Not only does this make the scenario difficult to believe, but it also sets up a series that must be read in order. Before you pick up the Explorer Academy Series, make sure you’re willing to invest the time to read all seven books in the series. Readers who aren’t ready to jump into a long series may want to check out the Secrets of the Seven Series by Sarah L. Thomson or the City Spies Series by James Ponti instead.

“Opportunity comes in many forms. It’s not how you get it that matters but what you do with it,” Taryn. –The Nebula Secret