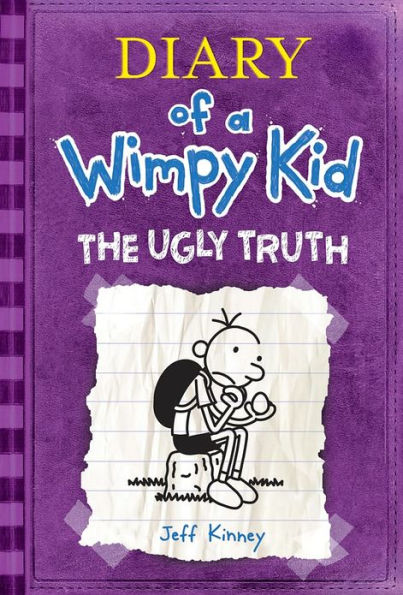 “I guess I’m just not in a big rush to grow up right now. And after Gammie showed me what’s in store over the next few years, I think I’m gonna take her advice and hang on as long as I can,” Greg Heffley. –Diary of a Wimpy Kid: The Ugly Truth

School’s back in session for Greg Heffley, but this time without his best friend Rowley. After Diary of a Wimpy Kid: Dog Days where Greg and Rowley end their friendship, Greg is all alone to face the trials and tribulations of middle school. Everything around Greg changes when puberty starts to strike the middle school population and Greg’s Mom returns to her schooling. He finds himself dealing with the pressures of boy-girl parties, increasing responsibilities, and the meaning of getting older all without his best friend. Will Greg survive until winter break or will he have to face the “ugly truth”?

The Ugly Truth’s plot revolves around everything that happens in Greg’s life and is written from his 12-year-old perspective. The story contains a lot of bathroom and childish humor. At one point in the story, Greg puts a whoopie cushion on his Grandma’s chair. When she sits down on it, he can’t stop laughing. After Greg hid rotten eggs in one of his uncle’s pants, his uncle has to move out of the house. The humor is awfully crude and disrespectful at times, and throughout the story Greg is obsessed with trying to get a girlfriend.

Despite the book’s bathroom humor, The Ugly Truth has some positive aspects. Jeff Kinney has a natural talent for using humor to entertain while teaching important life lessons. The Ugly Truth addresses the issue of puberty and the challenges puberty brings in a fun manner. Kinney makes it easy for readers to see that everyone goes through puberty, and it is not something to be ashamed of. Many of the characters even show off some of their changes, like Rowley’s first zit.

The consistent funny black-and-white illustrations help bring Greg’s struggles to life. However, parents should be aware of the book’s drawings and jokes as Kinney often uses bathroom jokes such as Greg’s friends going behind the curtain to make fart sounds at the lock-in. Many of the jokes are inappropriate for really young readers. The topic of sexual health and puberty’s changes comes up often. In addition, parents will not want their children to emulate Greg’s behavior because he demonstrates qualities such as laziness, selfishness, and narcissism. But at the end of the story, Greg shows a sign of maturity and decides to be a better friend to Rowley. He makes the first move in patching things up between them instead of waiting for Rowley to come crawling back to him.

Readers should read the books in sequential order in order to get the full effect of Greg’s character and humor. Many of the events and jokes overlap from book to book. Despite the story’s flaws, readers will relate to Greg as he goes through puberty. The Ugly Truth is a funny, enjoyable story that will entertain and teach practical lessons.

“I guess I’m just not in a big rush to grow up right now. And after Gammie showed me what’s in store over the next few years, I think I’m gonna take her advice and hang on as long as I can,” Greg Heffley. –Diary of a Wimpy Kid: The Ugly Truth