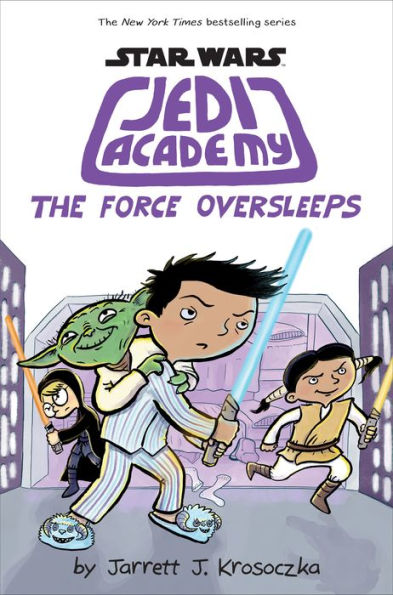 “I also have some work to do in regards to my self-control, but I’m getting there. I am, after all, at the best school in the entire galaxy,” Victor. –The Force Oversleeps

Victor cannot wait for his second year at the Jedi Academy! He’s ready to get back to school and see all his friends . . . only there’s a new kid in school who is on a mission to steal Victor’s thunder. As Victor deals with the jealousy of having a new kid steal so much attention, he also has to worry about his older sister Christina. For some reason, Christina’s old friends are bullying her and accusing her of going to the Dark Side. As Victor investigates, he begins to wonder if his sister is going to the Dark Side, and how he can stop her before it’s too late!

In the sixth installment of the Jedi Academy series, Victor seems to have forgotten many of the lessons he learned in the previous books. The story focuses on jealousy and not judging people based on their first impressions. Victor becomes jealous when the new student, Zavyer, gets a lot of attention from Victor’s friends. But when Zavyer is nice to Victor, even after Victor teases him, Victor begins to realize that Zavyer might be a good guy after all. The two boys learn they have a lot of things in common, and eventually become friends. Just in time, as Victor needs all the friends he can get as his sister appears to slip farther and farther to the Dark Side . . .

The Force Oversleeps is just as much fun as A New Class, but adds a mystery, sister-drama, and new-girl Elara. Elara is a positive addition to the story; she’s a little stalkerish, but also sweet and supportive of Victor. However, the story doesn’t just focus on school. Victor also has issues dealing with his step-father and he misses his dad. When Victor’s parents visit at the end, his mom says, “I must say, you were never this excited about school before.” His stepfather points out, “He just needed to find something he was passionate about.” Victor admits, he still has “some work to do in regards to my self-control,” but he continues to learn important lessons and he faces each obstacle with determination and optimism.

Told from Victor’s point of view, much of the story is written in an easy-to-read, diary format. The diary entries are frequently broken up by school newsletters, fun galaxy feeds, and space-themed comics. In addition, part of The Force Oversleeps is told in graphic-novel format. Large, often comical, black and white illustrations appear on every page. The illustrations show Victor’s range of emotions and bring the other human and alien characters to life. The illustrations break up the text, making each page accessible to most readers.

The Force Oversleeps is an entertaining story that is perfect for middle-grade readers because it deals with the topics of cyberbullying, crushes, and typical middle school drama. While the story teaches positive lessons, the tone is never preachy. Victor is a relatable, imperfect character, who shows personal growth. His story will encourage readers to be kind and not judge others based on first impressions.

“I also have some work to do in regards to my self-control, but I’m getting there. I am, after all, at the best school in the entire galaxy,” Victor. –The Force Oversleeps