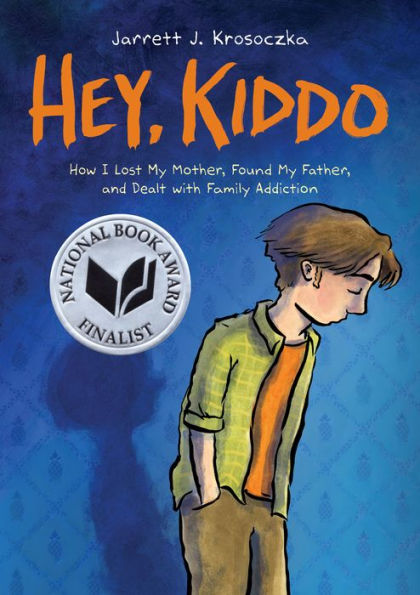 “You can apologize, but you can’t always undo what you do,” Holly. –Hey Kiddo

Not everyone’s family is the same. Jarrett learned this at a very young age. Most of his classmates had a mommy and a daddy. But Jarrett’s family life is complicated. His mom is an addict who jumps in and out of his life. His dad is a mystery—Jarrett doesn’t even know his name. Jarett lives with his grandparents. Although his grandparents loved him, they could be very impatient and opinionated.

Now that Jarrett is a teenager, he wishes his life were normal. His grandparents send him to a Catholic high school, where he doesn’t know anyone. Jarrett’s trying to navigate a new high school, a drug-addicted mother, and new adolescent freedoms. Jarrett lives in a home where no one talks about his past, his parents, or his problems. Art is the only thing that brings Jarrett a sense of accomplishment. When Jarrett finally gets his driver’s license, he decides to confront his father and find his own identity.

Hey, Kiddo is a powerful memoir in a graphic novel format that explores the painful effects of drug addiction. Throughout the story, the author shares artifacts from his youth, including original letters from his mother and drawings he created when he was young. The easy-to-read format shows Jarrett’s narration and thoughts in burnt orange boxes to distinguish them from the conversation bubbles. The drawings appear in shades of gray with splashes of burnt orange. Although the drawings are not beautiful, they perfectly convey the dark tone, Jarrett’s hectic life, as well as show the array of negative emotions the characters feel.

Although Jarrett’s grandparents clearly love him, they are far from perfect. His foul-mouthed grandmother is often more concerned with her television shows than Jarrett. Jarrett’s grandfather is emotionally unavailable but teaches Jarrett about the value of hard work. The one constantly good thing in Jarrett’s life is his next-door neighbor and best friend. The two boys are completely different but stick by each other through difficult times. The story highlights that people do not have to be perfect to have a positive impact on someone’s life.

Many readers will be able to relate to Jarrett’s complicated relationship with his family. When it comes to his mother, Jarrett feels anger, hate, resentment, and love. One example of Jarrett’s conflicting emotions is when he has a hard time picking out a Mother’s Day card for his mom because no cards fit their relationship. Jarrett thinks, “Hallmark didn’t make cards that said, ‘Even though you did all of those drugs, you’re still a swell mom!’ or cards that read, ‘Hey, remember all that time you spent in jail and missed, like, every aspect of my childhood.’”

Even though Hey, Kid is a graphic novel, it contains mature themes and language. While the sentences on each page are short and simple, the words have an impact and highlight the harsh environment in which Jarrett lived, as well as the often frightening events in Jarrett’s life. The book ends with a detailed author’s note explaining more about his life. In the author’s note, Jarrett says, “Your childhood realities do not have to perpetuate themselves into adulthood, not if you don’t let them.” Hey, Kid is an impactful story that will make readers think about the true definition of family. Jarrett’s memoir is both heartbreaking and hopeful because it proves that circumstances do not have to define you.

“You can apologize, but you can’t always undo what you do,” Holly. –Hey Kiddo