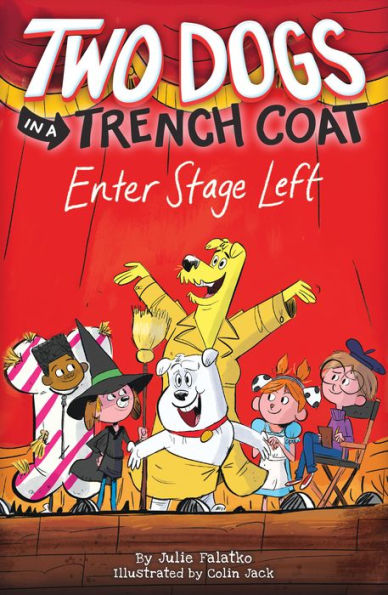 Two Dogs in a Trench Coat #4

Sassy and Waldo love their boy Stewart, so every day they put on a trench coat and go to school with him. Everyone thinks they’re a student named Salty, though Stewart knows the truth.

The whole class is putting on a play based on The Wizard of Oz. Sassy and Waldo are excited about the play, but they don’t understand acting. Stewart is playing the part of the wicked dog trainer witch. Now Stewart is acting like a different person—an evil person. Sassy and Waldo want to make sure that Stewart doesn’t stay evil all of the time.

Similar to the previous books in the series, Sassy and Waldo are still obsessed with food. However, the story’s premise revolves around the far-fetched idea that the two dogs don’t understand what acting is. Sassy and Waldo pretend to be Salty every day, so it’s hard to believe that they don’t understand acting and are worried about Stewart turning evil.

Another area that the humor falls flat is the introduction of the drama teacher, Mr. Rollins. Throughout the book, Mr. Rollins acts like a piece of furniture, and then jumps out and surprises the students. The first couple of times, his actions are funny, but after a while, readers will wonder why Mr. Rollins doesn’t actually help the students perform their play.

Sassy and Waldo are admirable for their loyalty and love, and seeing the world from their point of view is entertaining. However, the fourth installment of Two Dogs in a Trench Coat is not as entertaining as the others and has no educational value. Despite this, fans of Sassy and Waldo will still enjoy the dogs’ silly antics and the sweet conclusion.

Every page has large black and white illustrations that add humor to the story. The illustrations show a cast of diverse characters, including a girl in a wheelchair. The font changes each time Sassy and Waldo talk, making it easy for readers to follow along with the conversation. Many of the words appear in large, bolded font, which adds interest to the pages and highlights the dog’s love of food. Two Dogs in a Trench Coat Enter Stage Left uses an easy-to-follow plot and a unique concept that will engage even the most reluctant readers. Readers who love the humor of the Two Dogs and a Trench Coat Series should also check out the Mac B. Kid Spy Series by Mac Barnett.