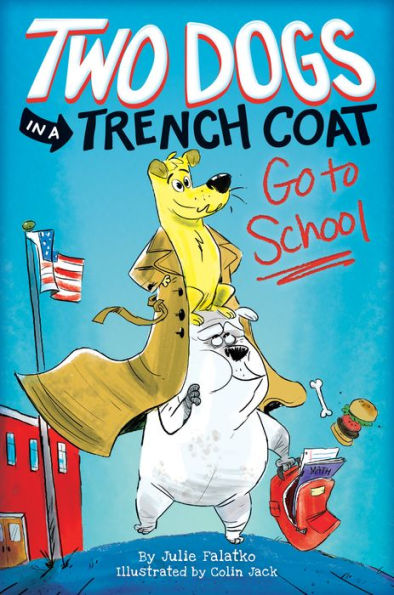 “Stewart throwing a squirrel is something I never realized I needed until right this moment,” Waldo. —Two Dogs in a Trench Coat Go to School

Two Dogs in a Trench Coat Go to School

Two Dogs in a Trench Coat #1

Waldo and Sassy spend their days taking naps and keeping the house safe from squirrels. When their boy Stewart comes home from school smelling like “boredom and anxiety,” the dogs decide to save Stewart. Waldo and Sassy stand on top of each other, dress in a trench coat, and enroll as a new student. Everyone at school thinks that Salty is a new student—everyone except Stewart. The two dogs help Stewart in an unexpected way.

Two Dogs in a Trench Coat uses silly, slapstick humor to engage readers. The dogs are obsessed with squirrels, meat, and helping Stewart. Some of the dogs’ conversations are random and repetitious. The dogs’ fascination with squirrels and the dogs’ myths about squirrels allows the reader to look at the world from a dog’s point of view. In the end, the dogs’ fascination with squirrels helps Stewart achieve success on his big project and allows the dogs to put their exceptional knowledge to use. The unexpected conclusion will bring out the giggles in readers.

Black and white illustrations appear on every page, which helps bring the dog’s actions to life. The character’s facial expressions are hilarious. The typography will help keep readers engaged. When the dogs speak, the font is larger and bolded. Food words, which are scattered throughout the book, are also bolded. Two Dogs in a Trench Coat would be a fun book to read out loud, especially if the reader used different voices. The change in the font is the perfect opportunity to have a younger reader take a turn reading.

One of the characters is surprisingly different than expected. Stewart thinks Bax hates him and is a bully, but in the end, Bax helps save Stewart from failing his big project. Bax realizes that his teasing comments were misinterpreted by Stewart and says, “And sorry about making fun of you. That’s just how they do it where I’m from. We let people know we like them by making fun of them. I forget sometimes that some people think that’s rude.”

Some readers may get bogged down by the length of the book—at 186 pages, the story slowly comes to a conclusion. Some portions of the story don’t add to the plot, such as a subplot about Mrs. Twohey’s teaching. She thinks that Salty is a spy from another school who is trying to discover her excellent teaching methods. If a reader has graduated to more mature books or likes to focus on facts, this book will not appeal to them. However, for readers who love ridiculous slap-stick humor, Two Dogs in a Trench Coat will make them smile.

“Stewart throwing a squirrel is something I never realized I needed until right this moment,” Waldo. —Two Dogs in a Trench Coat Go to School