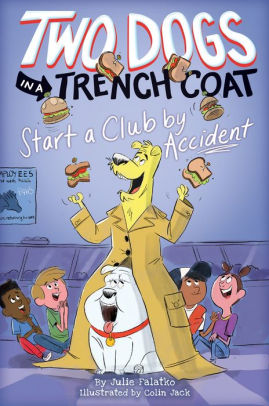 “I guess sometimes you are in a room looking for snacks and you start a club without meaning to,” said Sassy. –Two Dogs in a Trench Coat Start a Club by Accident

Two Dogs in a Trench Coat Start a Club by Accident

Two Dogs in a Trench Coat #2

Every day Sassy and Waldo dress in a trench coat together and impersonate a human child, so they can go to school with Stewart. Everyone thinks that they are a new student named Salty from Liver, Ohio. The only one who knows the truth is Stewart.

Stewart has to stay after school for a club. Sassy and Waldo know that a club is a sandwich, but they do not know what a school club is. Sassy and Waldo decide to use their time waiting for Stewart and play games. As the two wait for Stewart, they eat snacks, take naps, and smell things. When their classmates find out what Salty is doing, they decide to join the club. The only problem is that Salty still doesn’t know what a club is!

Part of the story’s humor comes from Waldo and Sassy misunderstanding the people’s words. Although the misunderstandings are funny, they also help readers understand that words have multiple meanings. For example, when the clubs are preparing to make a float for a parade, Salty says, “Because I do not know what a float is except for the kind with ice cream. . . Ms. Twohey taught me about context clues, and I am context cluing to know that we are talking about floats, but we are not talking about ice cream.”

Seeing the world from a dog’s point of view is highly entertaining. The dogs clearly love Stewart and want to understand his emotions. When Stewart smells like “a combination of lost homework and the feeling of watching the ice cream truck drive away,” the dogs know that Stewart is not happy, and want to help him. Even though the story focuses on humor and silly situations, the readers will also learn the importance of communication and helping others.

Spectacularly silly, Two Dogs in a Trench Coat uses an easy-to-follow plotline and fun black and white illustrations to make reading a joy. Even the most reluctant reader will want to see the mischief that Sassy and Waldo get into. The font changes each time Sassy and Waldo talk, making it easy for readers to follow along with the conversation. Many of the words appear in large, bolded font, which adds interest to the page and also highlights the dog’s love of food. Two Dogs in a Trench Coat will keep readers entertained until the very end because of the easy vocabulary, illustrations that appear on most pages, and the ridiculously funny story.

“I guess sometimes you are in a room looking for snacks and you start a club without meaning to,” said Sassy. –Two Dogs in a Trench Coat Start a Club by Accident