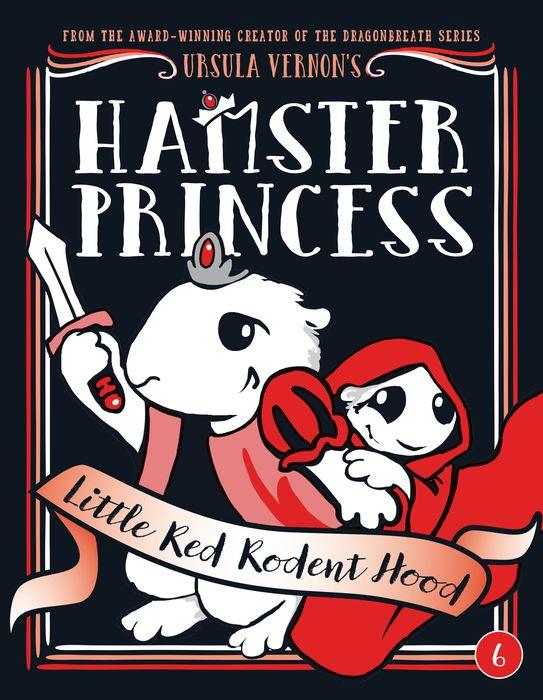 “Start at the point where you need me to hit something with a sword,” Harriet. –Little Red Rodent Hood

Princess Harriet Hamsterbone is a fearsome warrior. To her parents’ disappointment, Harriet takes any reason to leave her home… but this time a quest finds her. Red, a young hamster from the nearby forest, asks Harriet and Wilbur for help. The weasel-wolves have been getting rowdy, and she needs help to put an end to their antics. Harriet is more than willing to take up Red’s request, though Red is pushy.

Red tells Harriet and Wilbur not to talk to any of the weasel-wolves during their trek. Hoping to get another perspective, the two hamsters go behind Red’s back and speak to Grey, a were-hamster and the leader of the forest weasel-wolves. While Grey asks for help, Harriet and Wilbur realize that Red was not as sweet as she let them—well, Wilbur—believe.

Little Red Rodent Hood uses the story elements of Little Red Riding Hood and The Three Little Pigs, to create a humorous and fun adventure that will have readers turning the pages. Harriet goes on the quest, eager to get out of the castle but wary of Red because of the little girl’s indifference to the dangerous weasel-wolves. As Harriet and Wilbur go through the forest, they discover Red has been kidnapping the weasel-wolves for her Grandmother, who sells them to other rodents who want weasel-wolves as pets. Out of all the antagonists that Harriet has faced, Grandmother is one of the scariest, as she is rough and intimidating. However, readers will enjoy seeing how Harriet defeats Grandmother and frees the weasel-wolves.

Throughout Harriet and Wilbur’s time in the forest, there are multiple instances where recurring jokes overstay their welcome. Harriet asks Grey to bite her so she can become a were-weasel. Her request is innocent at first, but her demands get exhausting. This joke plays off Wilbur’s excessive caution and Harriet’s bravery. Still, Harriet goes to the extreme, to the point where she sticks her hand out in front of Grey’s mouth when he tries to get powdered silver out of his eyes. Harriet’s brashness adds a new dynamic to the conversations between her and her friends but distracts from the story because the humor does not add to Harriet’s character or the overall plot.

Blue and white illustrations add to the wackiness of the book. Drawings with dialogue balloons help break up the text and keep the action moving. Despite the lackluster humor, Little Red Rodent Hood shows the value of teamwork and will engage even the most reluctant readers. Little Red Rodent Hood is the sixth book in the Hamster Princess Series but can be enjoyed as a standalone book. Younger readers who enjoy Little Red Rodent Hood may also want to try Ursula Vernon’s other humorous series, Dragonbreath.

“Start at the point where you need me to hit something with a sword,” Harriet. –Little Red Rodent Hood