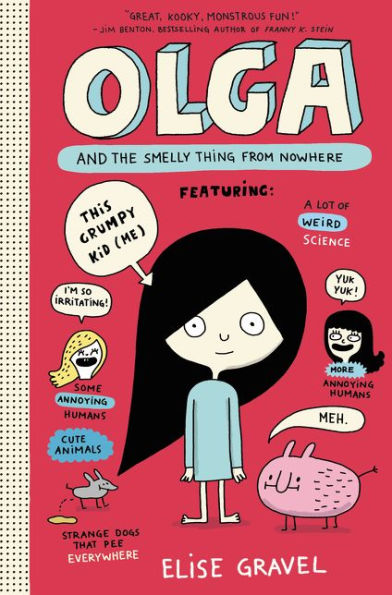 “We saved her (Meh) from ugliness, which is worse than death. Don’t you think she looks much better like this?” Farla. –Olga and the Smelly Thing from Nowhere

Olga and the Smelly Thing from Nowhere

Olga loves animals and science, but she’s not too great with people. When Olga finds a weird creature, she decides to take it home even though it smells terrible. She names the creature Meh after the sound he makes. Olga uses the scientific method to record her discoveries. She writes all of her research in her observation notebook. Olga heads to the library to research, but she soon learns that Meh isn’t in any of the books.

Olga calls Meh’s species olgamus ridiculus. She wants to learn everything about the new species. What does the olgamus eat? Why does its burp sound weird? Does it speak another language? Do they come from space? Olga’s research comes to a stop when Meh disappears. As Olga searches for Meh, she realizes that humans aren’t as bad as she thought.

Olga’s an odd character with a negative attitude. She likes animals more than people because “animals don’t pollute the planet and make wars and lie to you and steal your erasers and call you names. . . Even animals that people usually dislike are cuter than humans, in my humble opinion.” Much of Olga’s humor has to do with sniffing butts, farts, and poop. Olga even uses a page to draw different types of animal poop. Even though Olga makes several derogatory remarks about “evil humans” and their pollution, she doesn’t think twice about sending a huge helium balloon into the sky.

Olga’s illustrations make humans look ugly and weird. There are several humans—the store owner, the librarian, and a kid with squiggles for hair—that are kind to Olga. However, the story focuses so much time on poop, pee, and other gross potty humor, that it’s hard to take away anything good from the story. Even Olga’s observation notebook becomes a joke. Instead of listing anything factual and interesting, she makes observations such as this: “Mister’s Chasing Technique: 1. Run 2. Pee 3. Run 4. Pee.”

Olga and the Smelly Thing from Nowhere is a blend between a graphic novel and a picture book, which will appeal to reluctant readers. The cartoon-like illustrations are drawn in black with red and pink accents. The story uses a blend of regular story text and quote bubbles. Olga’s story will appeal to fans of Captain Underpants. Unfortunately, Olga and the Smelly Thing from Nowhere uses a combination of strange scientific observations, potty humor, and weird-looking humans. Olga’s story is one that is best left off of readers’ bookshelves.

“We saved her (Meh) from ugliness, which is worse than death. Don’t you think she looks much better like this?” Farla. –Olga and the Smelly Thing from Nowhere