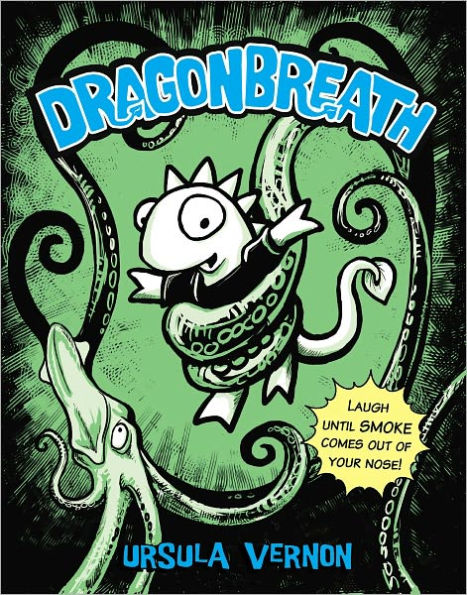 “That was the trouble with being Danny’s friend—you were prey to his sudden enthusiasms. The young iguana’d never really had a chance.” –Dragonbreath

Danny Dragonbreath is the only dragon in his school, and he isn’t the best student. He waited until he was on the bus to complete his writing assignment. Because his best friend Wendell, who is a great student, couldn’t help Danny with his assignment, Danny decided to make up some facts. Danny is filled with “righteous indignation” when his teacher gives him an F and tells him he must redo his writing assignment. Danny decides to go see his uncle, who is a sea serpent, for help. And of course, Danny takes Wendell along for the swim.

Even though Danny learns some cool facts about the ocean creatures, the facts are interwoven with fantasy, which may make it hard for readers to determine what is real information and what is fiction. For example, octopi can change their color to blend in with their surroundings, but the octopus Danny meets becomes stripped and then plaid.

Danny’s predicament leads to some hilarious and surprising events. Danny’s story is told in a unique style that blends a graphic novel and fiction. The text is broken up with illustrations and also has several graphic novel scenes with speech balloons. The blend of text and pictures will help keep reluctant readers engaged in the story. The comic-style illustrations are mostly black and white, but also have a pop of green.

Readers will relate to Danny, who fearlessly takes Wendell on a crazy adventure. The story is written in a conversational, humorous tone that is funny and engaging. Although the vocabulary is easy to read, the author uses some complex sentences as well as amazing descriptive language. Dragonbreath deals with bullying, friendship, and the importance of completing schoolwork correctly. Dragonbreath is an imaginative story that will make readers laugh. Those who enjoyed ridiculous, humorous, adventurous stories like Dragonbreath should also try The Yeti Files by Kevin Sherry.

“That was the trouble with being Danny’s friend—you were prey to his sudden enthusiasms. The young iguana’d never really had a chance.” –Dragonbreath