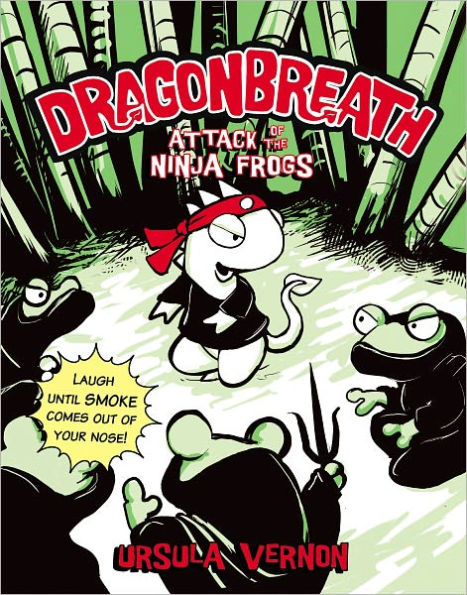 “Real live ninjas, a trip to mythological Japan, and pizza for dinner two nights running. Could life get any better?” Danny –Attack of the Ninja Frogs

Attack of the Ninja Frogs

Danny Dragonbreath knows girls are nothing but trouble. And the new foreign exchange student, Suki the Salamander, is the worst: she’s reduced his best friend, Wendell, to a blithering, lovesick tadpole. But when a group of ninja frogs attempt to kidnap her, Danny knows he must step in. Danny and Wendell have watched lots of kung fu movies and can totally take on a bunch of ninja frogs. Or, um, so Danny hopes . . .

Readers will be able to relate to Danny who is a daydreaming, comic-loving dragon who longs for adventure and pizza. The friendship between Danny and Wendell is one of the best and funniest parts of the story. Danny and Wendell are complete opposites, and yet they are amazing friends who always help each other. For example, when Wendell walked towards the school bully, “Danny, realizing that Wendell was about to do something profoundly stupid, hurried after him. (He wasn’t quite clear on whether he was going to stop Wendell doing something stupid, or help him do something stupid, but after all, that’s what friends are for.)”

Attack of the Ninja Frogs will entertain and delight readers who want a fun adventure with plenty of surprises. Even though some of the story revolves around girl stereotypes, such as girls having cooties, Suki’s smarts and skills are what eventually save the three friends. The frog ninjas want Suki to be their leader, which upsets Suki because she wants to be a veterinarian.

The humorous story has black and green illustrations that appear on almost every page. Drawings with dialogue balloons help break up the text and keep the action moving. Cool ninja facts and information about the Japanese culture are woven into the story. Even though the majority of the book is easy to read, the story does have some advanced sentence structure and vocabulary. Dragonbreath will get even the most reluctant readers engaged in a suspenseful story about ninjas, dragons, and friendship.

“Real live ninjas, a trip to mythological Japan, and pizza for dinner two nights running. Could life get any better?” Danny –Attack of the Ninja Frogs