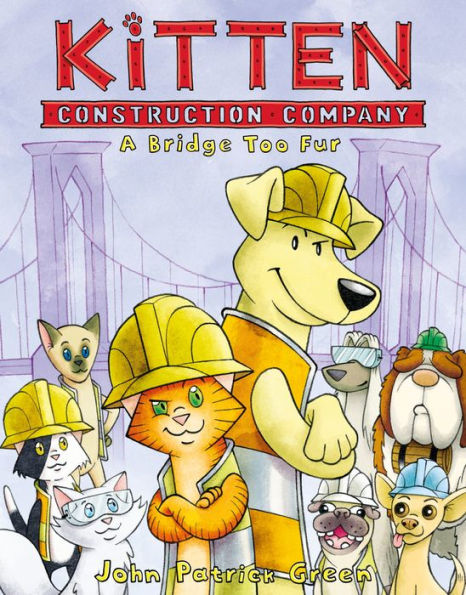 “Just because they’re dogs doesn’t mean I shouldn’t give them a chance. If they’re fine with working on water, then they can help this project stay afloat,” Marmalade. –A Bridge Too Fur

A Bridge Too Fur

Marmalade and her crew of construction kittens are in high demand!

Their latest assignment (and biggest job yet) is to build the new Mewburg bridge. But with the bridge comes the one thing cats hate most of all—water! As the team struggles to face their fears and do their jobs, they are forced to get help from some unlikely allies. . . slobbery, car-chasing DOGS.

A Bridge Too Fur has even more puns and wordplay than the first installment in the series, Meet the House Kittens. Both books show the importance of not judging others based on their appearance. While the theme is repeated several times, the examples are integrated into the story so the message doesn’t sound like a lecture. For example, when Bubbles says, “Sometimes our eyes see what we want to see, Marmalade. Like how people used to see us only as adorable little kittens.”

Another positive aspect of the story is when Marmalade realizes he had “been refusing to give these dogs a fair chance.” Instead of trying to deny his actions, Marmalade apologizes and makes changes. When Marmalade does this, the dog accepts the apology and says, “Cats and dogs are different. We’ve had to prove ourselves to people in different ways. You are more than just cute and adorable. And I am more than just a slobber factory that chases cars.”

The bright, comic-like illustrations are displayed in 1 to 3 large panels. Each page has 0 to 6 sentences that appear in quote boxes. The illustrations and text boxes make it easy to understand the plot. However, younger readers may need help with some of the more difficult words, such as demolished, coordinate, and landlubbers.

With adorable animals, puns, and humorous illustrations, A Bridge Too Fur will appeal to a wide variety of readers. A Bridge Too Fur is fun to read and will encourage readers not to make assumptions about others. If you’re looking for more graphic-novel, animal fun THEN check out the Bird & Squirrel Series by James Burks.

“Just because they’re dogs doesn’t mean I shouldn’t give them a chance. If they’re fine with working on water, then they can help this project stay afloat,” Marmalade. –A Bridge Too Fur