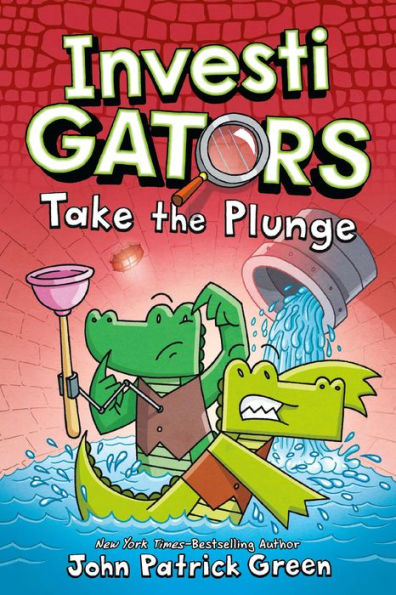 “There’s nothing I hate more than soggy socks! Except for crime and villainy—but soggy socks come close!” General Inspector. – Investigators Take the Plunge

Investigators Brash and Mango go undercover in order to intercept a rocket that carries the stolen code for the Combinotron—a device that can stick any two things together. Instead of destroying the code, the investigators accidentally download the code into a robot that has been programmed to hug people. After a freak accident, the robot is able to travel through electricity. And every time the robot hugs someone, that person combines with whatever they are touching.

Investigators Take the Plunge is an imaginative graphic novel that is laugh-out-loud funny. The combination of human and animal characters blend to mix into a ridiculous story that uses wordplay to add humor. Even though some of the humor revolves around Brash’s need to go to the bathroom, the bathroom humor is never gross. As Brash and Mango work the case, they use fun spy gadgets, compete against a team of badger agents, flood the sewers, and are responsible for unleashing an evil villain.

The imaginative story comes alive in brightly colored artwork that shows the characters’ wide range of emotions. The text is large and uses different font sizes, which help emphasize the characters’ emotions as well as important aspects of the story. Similar to superhero comics, the story contains onomatopoeias such as crash, bwonk, and foosh. Another positive aspect is that the human scientists are a diverse group of characters who have a wide range of skin tones.

The illustrations and the unique storyline with Brash and Mango will appeal to even the most reluctant readers. Each page has 3 to 11 sentences per page. The sentences range from one word to more complex sentences. The varied sentence lengths add to the humor while keeping the story accessible to all readers.

Investigators Take the Plunge will appeal to many readers because honestly, who doesn’t want to see two alligator investigators wreak havoc? The story is unique, full of slapstick humor, and contains a non-frightening villain. Readers who enjoy humorous graphic novels that border on the ridiculous should add Mac B. Kid Spy by Mac Barnett and Two Dogs in a Trench Coat by Julie Falatko to their reading list.

“There’s nothing I hate more than soggy socks! Except for crime and villainy—but soggy socks come close!” General Inspector. – Investigators Take the Plunge