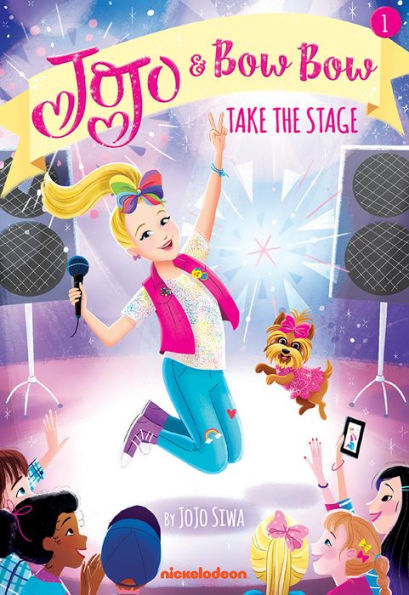 Other books by JoJo Siwa

“Siwanatorz stands for kindness. We stand up for each other and believe that bullying or being mean is never okay—like, not ever. We always have each other’s backs,” JoJo. –Take The Stage

When her neighborhood decides to throw a block party, JoJo Siwa has the best idea ever: she’ll perform her hit song “Boomerang” as a highlight of the big summer bash. With her crew of friends behind her and the support of her trusty sidekick, BowBow, JoJo is sure their summer will be as sweet as it gets. Then, she meets Grace—the new kid on the block with tons of talent—and JoJo knows her plan for a rockin’ party is complete!

But Kyra, resident mean girl and head of the party-planning committee, has other ideas. When Kyra’s jealousy threatens to ruin the entire block party, JoJo knows it is time to rally her fans, nick-named Siwanatorz, and save the day. After all, being a Siwanatorz means—above all—being kind.

Take The Stage has a little bit of glitter, unicorns, and girl power wrapped up in a fun book that will make readers want to have a dance party of their own. While the plot is predictable and JoJo is a little too sweet, younger readers will be entertained as they learn the importance of making new friends and being kind to others—even your enemy.

Even though BowBow is on the cover of the book and his name is in the title, he rarely appears and does nothing to advance the plot. The story focuses on the girl drama between Grace and Kyra. When Grace first meets JoJo, Grace wonders if she should hide her love of unicorns because she doesn’t want to be made fun of. However, with the help of JoJo and her friends, Grace realizes that she doesn’t need to change. And by the end of the book, all the girls are well on their way to being friends.

Another positive lesson from Take The Stage is the importance of apologizing. JoJo says, “But my mom always told me that you don’t apologize to be forgiven. You apologize because it’s the right thing to do.” While Take The Stage has some positive life lessons, the story also promotes JoJo’s songs and YouTube channel. At times the story is a little too sugary sweet and the conclusion shows everyone forgiving the bully and becoming friends, which is unrealistic.

While Take The Stage is intended for girls six or older, the vocabulary will be difficult for younger readers. Readers who enjoy illustrated chapter books will find Take The Stage’s text-heavy pages a little overwhelming. Each chapter starts with a cute black and white illustration, but they are the only pictures that appear in the book. If you’re not familiar with JoJo’s products, you may want to skip the self-promoting series JoJo and BowBow. Instead, try an illustrated series that promotes friendship—such as Diary of an Ice Princess by Christina Soontornvat or Jada Jones by Kelly Starling Lyons.

Other books by JoJo Siwa

“Siwanatorz stands for kindness. We stand up for each other and believe that bullying or being mean is never okay—like, not ever. We always have each other’s backs,” JoJo. –Take The Stage