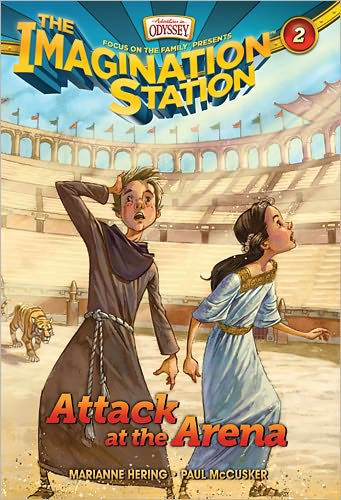 “You have great courage, but lack wisdom. Stay and they’ll make you a slave,” Brother Telemachus. —Attack at the Arena

Attack at the Arena

Mr. Whittaker finds a mysterious letter inside the Imagination Station. The letter leads Patrick and Beth to fifth-century Rome on a quest to find a special cup that belongs to a monk. The cousins jump back in time and end up at the Roman Colosseum.

Before long, Beth and Patrick are separated. Patrick meets Telemachus, a monk, who believes fighting is wrong. Telemachus wants the emperor to end the gladiator battles. Telemachus guides Patrick as he looks for his cousin.

Meanwhile, Beth is mistaken as a slave and is sent to serve in the emperor’s palace. As the Emperor’s servant, Beth must attend Emperor Honorius’s gladiator battle. Patrick also attends as a monk’s apprentice but is captured and sent to fight in the arena. Will Patrick be able to survive?

History is incorporated into the story through Telemachus, Emperor Honorius, and the arena fighting. The story describes the horrors of the arena fighting in child-friendly terms and leaves out graphic violence. After reading the story, many may want to know more about ancient Rome.

Attack at the Arena has a fast-paced, action-packed plot with a strong message of faith. Since lessons in faith are delivered through the monk Telemachus, the lessons do not come across as preachy. Instead, readers will see how Telemachus lives his faith. Through Telemachus’s actions, the reader will learn that, “Greater love has no one than this, that he lay down his life for a friend.”

Readers who enjoy The Magic Tree House will want to add Attack at the Arena to their reading list. Both series have likable characters, mystery, and time travel. However, Attack at the Arena teaches how God can change people. This book is the second installment of The Imagination Station Series; as each book builds on the previous story, readers should read Voyage with the Vikings first. The interesting plot will keep readers turning the page until the very last page.

“You have great courage, but lack wisdom. Stay and they’ll make you a slave,” Brother Telemachus. —Attack at the Arena