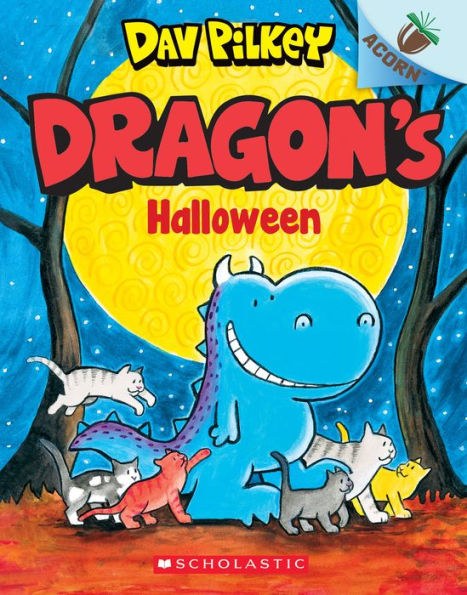 Dragon waits too long to go to the pumpkin patch. When he gets there, he finds six small pumpkins. When Alligator and Fox see Dragon carving his pumpkins, they laugh. Fox says, “Those pumpkins are too small to be scary.” Even though the pumpkins are small, Dragon is able to make a scary jack-o-lantern.

After carving pumpkins, Dragon has a hard time deciding what costume to wear to a costume party. He finally dresses as a mummy, but on the way to the party, rain ruins Dragon’s costume. His friends laugh at his silly costume. But then a pumpkin falls on Dragon’s head and all of his friends are so scared they jump into Hippo’s arms. When Dragon removes the pumpkin, everyone feels better. Everyone except the one animal that Hippo sat on.

In the final story, Dragon is frightened by strange sounds in the night. When Dragons yells, an angry squirrel tells him, “That’s no monster. That’s your stomach! Now go home and get something to eat before you wake up the whole forest!” So Dragon goes home and bakes a feast of pumpkin-flavored foods. And then he “ate and ate and ate.”

Readers won’t be able to get enough of Dragon, the loveable blue dragon. Dragon’s Halloween has three silly, short stories that will entertain readers. Each page has 1-4 easy-to-read sentences and large illustrations. Each Halloween story has a simple plot. The book is intended for children who are learning to read. With simple text, humor, and full-color illustration on every page, Dragon’s Halloween will help readers build confidence and fluency. As Dragon gets into the Halloween spirit, readers will laugh as he discovers both the fun and the scary parts of Halloween.