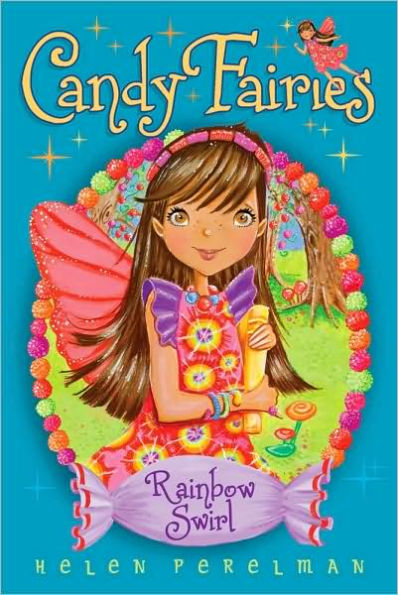 Other books by Helen Perelman

Princess Lolli proclaimed, “The special pink candy heart is for her [Raina’s] dedication to the animals in Gummy Forest. . . We thank you for your hard work. The animals would not have had a place to stay after the storm if it hadn’t been for your quick thinking and dedication.” –Rainbow Swirl

Candy Fair is one of the biggest candy events in Sugar Valley. Raina the Gummy Fairy is serious about winning first prize. She follows all the rules to make the perfect new candy. Raina wants her friends to be excited about entering the contest as well. But Berry is more interested in making jewelry and Dash is busy making a new sled for the Marshmallow Slopes.

When a terrible storm blows through Gummy Forest, all of Raina’s dreams are washed away. Despite this, she gathers her friends and helps clean the forest so animals can find their homes. After Raina takes care of the animals, she goes back to check on her candy berries. She thinks they are ruined because all of the colors and flavors have blended together. Her friends still encourage her to enter her candy into the contest, but is there anyway her imperfect candy can win the contest?

Many readers will relate to Raina, who isn’t afraid to show that she is smart. Raina loves research and knows the entire Fairy Code Book by heart, but sometimes her “fairy friends made fun of her for following the rules so closely.” However, in the story, all of Raina’s friends are supportive even though they have different interests.

Rainbow Swirl doesn’t have a villain because the conflict comes from Raina’s conflicting emotions about her friends not wanting to make candy for the Berry Fair. Readers will relate to Raina’s conflict and understand her fears. In the end, the friendship between the fairies will keep readers engaged.

Even though Raina’s friends don’t want to participate in the Berry Fair, they still support Raina’s efforts. Raina’s friends help her because they gave her “the courage to see that something not perfect might be better than planned.” Raina doesn’t win the contest, but she is recognized for her acts of kindness.

Rainbow Swirl begins with a map of the Candy Kingdom. The Peppermint Grove and other elements will remind readers of the game Candy Land. The book is crammed full of candy references such as “sure as sugar” and “whoever heard of such a gummy thing.” Black and white illustrations appear every 2 to 3 pages and show the fairies wearing pretty dresses. Although most of the fairies look similar, one fairy is African American.

Rainbow Swirl is a sweet, engaging story that proficient readers will enjoy. The story focuses on friendship and teaches important lessons. For example, Raina learns that “sometimes the greatest surprises come from the most unlikely places.” In a world where perfection is often glorified, parents will appreciate Rainbow Swirl’s message that something doesn’t have to be perfect in order to be great.

The fairies say exclamations such as “chocolate sprinkles,” “holy peppermint,” and “sour sticks”

Other books by Helen Perelman

Princess Lolli proclaimed, “The special pink candy heart is for her [Raina’s] dedication to the animals in Gummy Forest. . . We thank you for your hard work. The animals would not have had a place to stay after the storm if it hadn’t been for your quick thinking and dedication.” –Rainbow Swirl