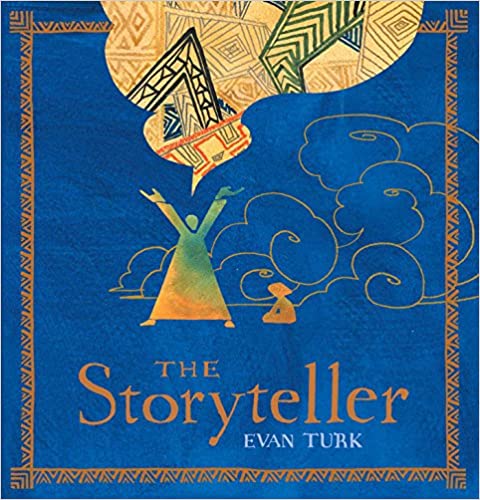 “You must first find hope for yourself before you can weave it for others,” the old woman. – The Storyteller

Long ago, cool water from fountains and engaging tales from storytellers sustained the kingdom of Morocco despite the conditions of the surrounding desert. However, as the peoples’ fear of the desert faded, so did their memory of these stories. Storytellers began to disappear. Soon after, the fountains dried up, leaving the kingdom in a severe drought. Many years later, a young boy’s encounter with a remaining storyteller might be the only hope the kingdom has to save them from division, thirst, and a coming sandstorm.

The Storyteller is set in a fictionalized Morocco where storytelling and weaving are significant artforms of the kingdom’s cultural history. The narrative teaches readers that well-made art has the power to preserve culture and give its listener a clearer understanding of themselves and of others. In the book, artists can literally create and sustain life, whether that be through stories that give water to its listener, or through magical threads that weave kingdoms.

The Storyteller is distinguished by its abstract illustrations. Often spread across both pages, the story’s illustrations help the reader to believe the sheer scope of the kingdom, the allure of the glistening blue water and gold threads, and the looming threat of the massive sandstorm. Blending hurriedly pencil-drawn characters reminiscent of cave drawings with multi-layered, watercolor backgrounds and figures, the art of The Storyteller strengthens its narrative’s stance as an ode to storytelling old and new.

Even though The Storyteller is a picture book, the story is intended to be read aloud to a child, rather than for the child to read it for the first time independently.  Each page ranges from 1 to 13 sentences and younger readers may need help understanding some of the book’s vocabulary, including “spindle,” “buoyant,” and “sapphire.” The Storyteller becomes a story within a story with each new tale the title character weaves. While the book uses different colored fonts to separate the stories, parental assistance will be needed to help younger readers follow the layered narrative.

The Storyteller is sure to engage readers by introducing them to the world of its several tales. While the nameless protagonist of the book might lack significant personality, readers will nonetheless identify with his fascination with stories, his bravery, and his lesson of a well-told story’s power. Plus, its lesson on the importance of storytelling makes it a must-read for any reader learning storytelling and artmaking. If you’d like to read another fun book that shows the importance of storytelling, check out Octopus Stew by Eric Velasquez; it is sure to make young readers smile.

“You must first find hope for yourself before you can weave it for others,” the old woman. – The Storyteller