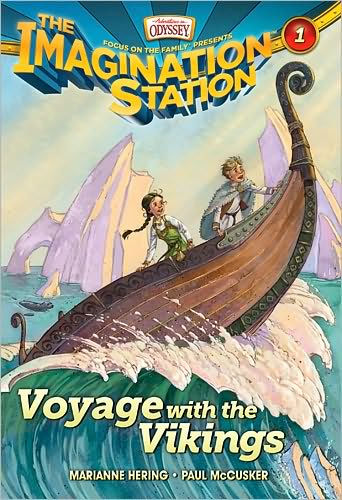 Voyage with the Vikings

Mr. Whittaker uses the Imagination Station to send cousins Patrick and Beth back to the time of the Vikings. Mr. Whittaker asks the cousins to bring back a sunstone, but they don’t know what a sunstone looks like. Even if the two knew what they were looking for, finding the sunstone would be difficult. Once they arrive in Greenland, Erik the Red accuses them of being spies and threatens to enslave them. Patrick and Beth wonder if they can complete their mission and find the sunstone without angering Erik the Red and becoming his slaves.

Full of action, Voyage with the Vikings introduces young readers to the life of a Viking. Although the reader gets a glimpse at Erik the Red’s violent temperament, there is no actual fighting. Part of the storyline shows the difference between Vikings and Christian beliefs.

This story gives the reader a view into another time period and creates suspense that will keep the reader wanting to know what happens next. Voyage with the Vikings is easy to read with kid-friendly language. The end of the book will leave even the most reluctant reader wanting to pick up the next in the series.