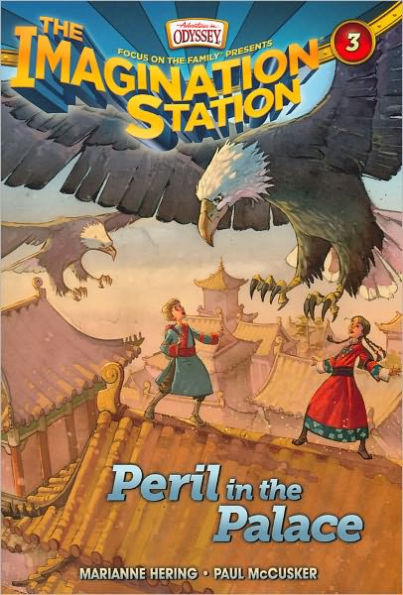 “You were brave,” Beki said. “You told my grandfather about Jesus.” –Peril in the Palace

Peril in the Palace

Beth and her cousin Patrick go to China in 1271 where they have to find the golden tablet of Kublai Khan. Once in China, the cousins are kidnapped by Mongol warriors, who think they are evil. Only the friendship of fellow traveler Marco Polo saves them from harm.

At the Shangdu palace, Kublai Khan dislikes Beth’s and Patrick’s gifts and the message about Christianity. Next, the Mongol magicians challenge the cousins to a spiritual power showdown. The cousins are again locked up. But then they meet Genghis Khan’s great-great-granddaughter. However, Beth and Patrick are not safe, so they escape from the palace.

Before the cousins are able to make it safely away from the palace, two giant birds swoop down and grab them. The birds take them to their nest where hungry chicks wait for a meal. A mysterious knight appears and helps the kids make it back to the Imagination Station.

Despite this, readers will appreciate the fast-paced plot which shows the importance of sharing the Christian faith. When the Mongol shamans use “magic,” Beth is able to show how the shamans are really using magnets to perform the magic. While the religious message is not as strong as the previous books, the story of Jesus is incorporated into the story.

The large text and illustrations make the story accessible to readers ready for chapter books. Black and white illustrations of varying sizes are scattered throughout the book. Parents who are looking for a wholesome book that incorporates the Bible into the story will find the Imagination Station Series a good choice. Readers who want more time traveling fun should check out the Time Jumpers Series by Wendy Mass.

“You were brave,” Beki said. “You told my grandfather about Jesus.” –Peril in the Palace