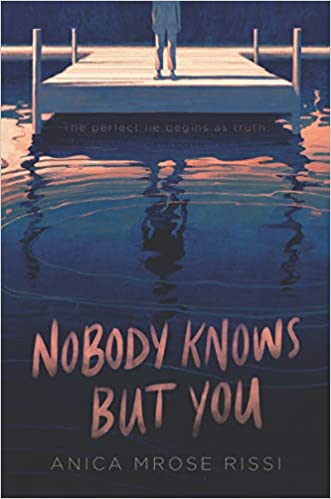 “There are pieces of this story I don’t want to be true, and truths I don’t think I’ll ever understand. I don’t want to talk about those. It makes my throat close up and my eyes sting just thinking about it. And I’ve never been a good liar. Not compared to you,” Kayla.      —Nobody Knows but You

Nobody Knows but You

Kayla Martin has always been a bit of an outcast. That is until she meets Lainie at an eight-week-long summer camp. The two girls instantly become inseparable. Lainie is fun, charming, larger than life, and able to bring out a side of Kayla that she never knew she had. However, it isn’t long before another camper enters the picture.

Nerdy but confident, established playboy Jackson immediately grabs the interest of Kayla’s newfound best friend. The two begin a passionate, hot, and cold relationship. Though Kayla is less than thrilled about the effect Jackson is having on Lainie—and about becoming the third wheel—she remains fiercely loyal and hopes Lainie will come to her senses by the summer’s end.

But the summer ends with Jackson’s corpse being discovered in the lake. Foul play is suspected, and Lainie quickly becomes the prime suspect. As her friend awaits trial, Kayla grapples with the murder and the events leading up to it. Everyone else seems so sure of the truth, but she knows there’s often more to a story than meets the eye.

Nobody Knows but You is largely told from letters Kayla writes, but never sends, to Lainie. These letters describe her memories of that fateful summer as well as the aftermath. Kayla’s perspective, especially in the format it’s presented, is very unreliable. Early on she states, “even now, I am keeping [Lainie’s] secrets. Everyone that I can.” It becomes clear Kayla has a very biased outlook on the situation, and the reader is not necessarily meant to agree with how she perceives the events.

In order to give more perspective, the reader also gets glimpses of Kayla’s text exchanges with various characters. Kayla’s contributions to these exchanges tend to be very short and vague while the other person provides more substance, which shows that our narrator doesn’t reveal all that she knows. In addition, the narrative sometimes shifts to news articles and fellow campers’ transcribed statements. The articles and statements give the reader outside perspectives that highlight Kayla’s bias. The perspectives provided give the reader a very intimate (Kayla’s letters), semi-removed (camper’s statements), and outside (articles) look at the situation.

The story emphasizes the idea that strong connections and a deep sense of community are formed at camp. An unnamed camper muses, “I have friends I was tight with only the last ten days of camp and I know them better than people I’ve been friends with all of high school. You kind of have to experience it to know about it, but it’s true.” Teenagers who have been avid attendees of summer camp will likely be able to relate to this sentiment and understand why Kayla holds her bond with Lainie in such high regard. However, Kayla and most of the other characters are unlikable. This seems to have been the author’s intent, but it might make it difficult for some readers to get invested in the story.

Nobody Knows but You suffers from underdeveloped characters, particularly in the case of Kayla herself. Another negative aspect of the story is that the letter-writing format makes it difficult to gauge who she is outside of her relationship with Lainie. Furthermore, the final twist will be predictable for seasoned YA readers. However, this is a short and fast-paced read that is intriguing. While not a must-read, it is a gripping story that even the reluctant reader will be drawn into.

“There are pieces of this story I don’t want to be true, and truths I don’t think I’ll ever understand. I don’t want to talk about those. It makes my throat close up and my eyes sting just thinking about it. And I’ve never been a good liar. Not compared to you,” Kayla.      —Nobody Knows but You