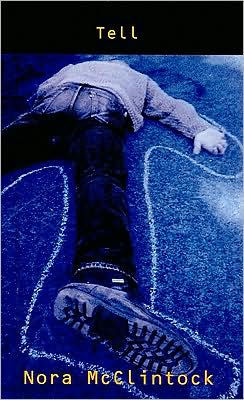 David isn’t sad that his stepfather is dead. However, he didn’t expect to become the prime suspect of his murder. The detective investigating the case is convinced that David is keeping secrets—and he’s right. David knows the truth about his stepfather’s death. But can he convince the police that he’s not guilty of shooting his stepfather and leaving him to die?

Tell, published by Orca Book Publishers, is specifically written for teens who want to read short, high-interest novels.  The story focuses on David and his struggles with his stepfather, Phil. The easy-to-read story shows the harsh realities of life without going into graphic descriptions. Even though David tells his own story, the mystery of his stepfather’s death leaves the reader wondering if David is actually the murderer.

The suspenseful story has a dark undertone. David struggles with his brother’s death, his mother’s deceit, and his stepfather’s manipulation. As David interacts with his mother, her uncaring and lying nature becomes obvious. In the end, Tell shows that sometimes the monsters in people’s lives are the ones living under their own roof. The sad ending can lend itself to some good discussion between parent and child.