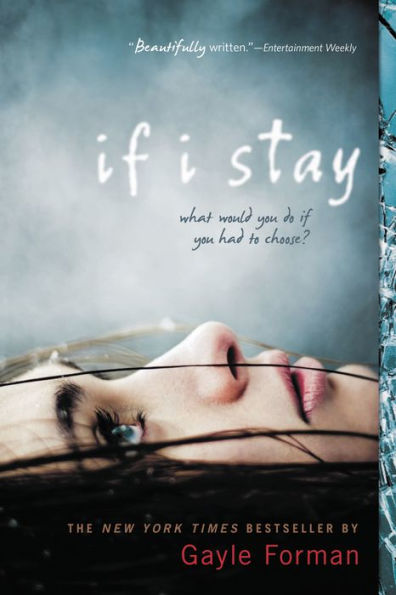 Other books by Gayle Forman

“I realize now that dying is easy. Living is hard,” Mia.  –If I Stay

In an instant, everything changes for seventeen-year-old Mia. A horrific car accident kills her family and leaves Mia struggling for her life. As her injured body is taken to the hospital, Mia hovers between life and death. Mia sees herself and is able to walk through the hospital and listen to the living.

Mia roams the halls of the hospitals and listens in on family, friends, and others. As she contemplates her life, she struggles with the loss of her family.  In the end, she must decide if she will stay.  Can Mia face life with possibly crippling injuries? Is her love of friends and family enough to make her stay? Is her life worth living if her family is gone?

Readers will be captivated as Mia reflects on her relationship with her family, boyfriend, and friends.  Told from Mia’s point of view, teens will relate with her as she navigates the difficult decisions about college and boyfriends. If I stay is geared for older readers who are ready to read a book with mature themes and sexual material.

Other books by Gayle Forman

“I realize now that dying is easy. Living is hard,” Mia.  –If I Stay