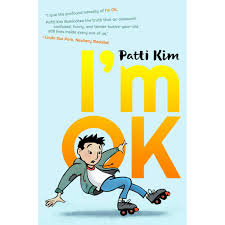 Ok’s life takes a dramatic turn for the worse when his father dies. His mother works three jobs, yet barely makes ends meet. Ok feels that as the man of the house, he should help pay the bills. As a twelve-year-old, he has little opportunity to make money. He hopes he can win the cash prize at the school talent contest, but he can’t sing or dance, and he has no magic up his sleeves. With no talent, he has to come up with another business.

Soon, Ok is braiding hair for the girls at school, but the girls can’t pay him much. His braiding business makes Mickey McDonald notice him. The girl, with a larger-than-life personality, wants to be his friend. Ok is used to being by himself, and he doesn’t want to be friends with Mickey, who will distract him from his mission—making money.

Life gets worse when the pushy deacon at their Korean church starts wooing Ok’s mom. Ok doesn’t want his mom spending time with the deacon. His mom is so caught up in the deacon that she doesn’t even notice Ok anymore. Feeling lost and confused, Ok comes up with an exit strategy. Will being totally alone, give Ok the peace he needs?

I’m Ok deals with the difficult topics of grief, poverty, racism, and friendship. Even though the story highlights the importance of friends, Ok’s story is often dark and depressing. At school, Ok is bullied and made fun of because he’s Korean. He reluctantly becomes friends with Mickey, who is self-assured but also ignored by many of the students. The two team up to win the school talent contest, and Mickey begins teaching Ok to skate. Mickey spends time with Ok, gives him a pair of skates, and is kind to him. Despite this, the only thing Ok cares about is winning the contest’s money. At one point, Ok even steals from Mickey’s mother. While Ok’s homelife is understandably difficult, his negative reaction to all events and his self-centered, mean personality make it difficult to feel compassion for him.

Ok spends time reminiscing about his father, who he clearly misses. Even though Ok grieves for his father, most of Ok’s memories of his father are negative. His father treated both Ok and his mother terribly. For example, Ok’s father would talk under his breath, “loud enough that I could hear, but soft enough so I felt guilty about eavesdropping, ‘When’s this idiot going to be human?’” Ok’s father isn’t shown to have many positive aspects other than financially supporting the family.

I’m Ok shows the difficulties many Korean immigrants face. However, the story’s conclusion leaves several threads untied. Plus for the entire story, the deacon is portrayed in such a negative light that it is difficult to understand why Ok’s mother marries him. Even though Ok and several of the supporting characters are well-developed, readers may have a difficult time relating to Ok, who is often mean to those who care about him. If you’re looking for a book that tackles racism and/or poverty, you may want to leave I’m Ok on the library shelf. However, Katherine Applegate excellently tackles both issues in her books Crenshaw and Wishtree.