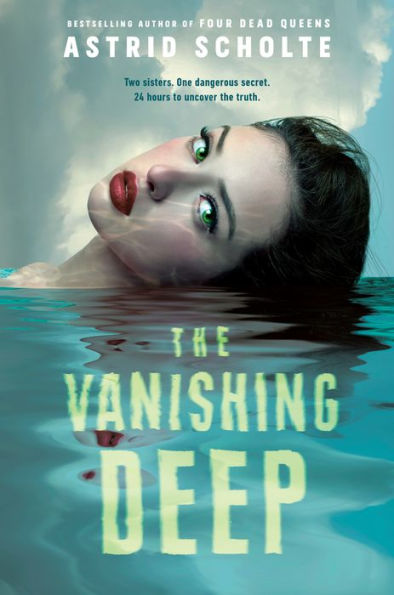 “Nothing ruined life more than regret,” Lor. –The Vanishing Deep

Seventeen-year-old Tempe was born into a world of water. When the Great Waves destroyed her planet five hundred years ago, its people had to learn to survive living on the water. However, the ruins of the cities lay below. Tempe dives daily, scavenging the ruins of a bygone era, searching for anything of value to trade for Notes. It isn’t food or clothing that she wants to buy, but her dead sister’s life.

For a price, the research facility on the island of Palindromena will revive the dearly departed for twenty-four hours before returning them to death. It isn’t a heartfelt reunion that Tempe is after; she wants answers. Elysea died keeping a terrible secret, one that has ignited an unquenchable fury in Tempe. Tempe knows that her beloved sister was responsible for the death of their parents; now she wants to know why.

But once revived, Elysea has other plans. She doesn’t want to spend her last day in a cold room accounting for a crime she insists she didn’t commit. Instead, Elysea wants her freedom and a final glimpse at the life that was stolen from her. She persuades Tempe to break her out of the facility, and they embark on a dangerous journey to discover the truth about their parents’ death. Every step of the way they are pursued by Lor, a Palindromena employee desperate to find them before Elysea’s twenty-four hours are up—and before the secret behind the revival process and the true cost of restored life is revealed.

The Vanishing Deep takes the reader on a trip into the future, where people live on metal structures on the ocean. The Old World was destroyed due to unsustainable practices because people “always [are] wanting more than we have.” Scholte’s world-building is detailed, realistic, and beautiful. Even though the story shows the importance of caring for the earth, the message is integrated into the story and never feels like a lecture.

The story jumps back and forth between Tempe’s and Lor’s points of view, which helps build suspense. Both characters are suffering from grief, but they each react to the loss of a loved one in different ways. Lor hides from the world and forces himself to pay penance to his friend’s death. On the other hand, Tempe is so shrouded in anger that she hasn’t grieved for her lost sister. By the end of the story, both Lor and Tempe realize they need to deal with their grief. Tempe realizes “anger had been my anchor. It had tethered me to the darkness in the world, to the things I couldn’t control. I had hidden from my grief. It was easier that way. But it wasn’t healthy.”

The Vanishing Deep is a suspenseful story that propels readers into an imaginative world that makes one consider questions about death. Tempe and Lor’s different perspectives show how grief can overtake someone’s life in unexpected ways. The conclusion contains several surprises but also leaves many unanswered questions. Despite this, readers will enjoy the journey through the New World, where people can resurrect a loved one. The story leaves off on a positive note by reinforcing the need for people to go through the grieving process, which includes learning to fully live their lives even though they’ve suffered an incredible loss.

“Nothing ruined life more than regret,” Lor. –The Vanishing Deep