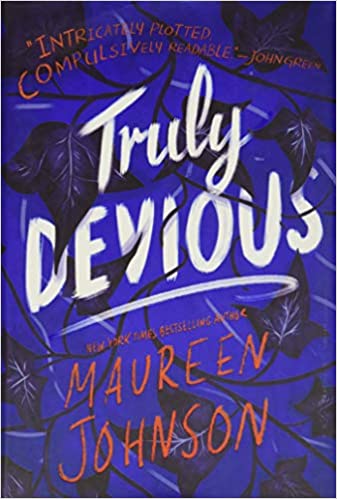 “This is about real people, not figures from fiction. I know this crime is popular—that crime itself is popular. But crime has a human face. If you’re going to study crime, you have to remember the people involved,” Charles. –Truly Devious

Ellingham Academy is a famous private school in Vermont for the brightest thinkers, inventors, and artists. It was founded by Albert Ellingham, an early twentieth century tycoon, who wanted to make a wonderful place full of riddles, twisting pathways, and gardens. “A place,” he said, “where learning is a game.”

Shortly after the school opened, his wife and daughter were kidnapped. The only real clue was a mocking riddle listing methods of murder, signed with the frightening pseudonym “Truly, Devious.” It became one of the great unsolved crimes of American history.

True-crime aficionado Stevie Bell is set to begin her first year at Ellingham Academy, and she has an ambitious plan: she will solve this cold case. That is, she will solve the case when she gets a grip on her demanding new school life and her housemates: the inventor, the novelist, the actor, the artist, and the jokester.

But something strange is happening. Truly Devious makes a surprise return, and death revisits Ellingham Academy. The past has crawled out of its grave. Someone has gotten away with murder.

Truly Devious will captivate murder mystery fans as it goes back and forth from the 1936 kidnapping of Ellingham’s wife and daughter and the current students who reside at Ellingham Academy. While Stevie scours the school’s archives for clues to the cold case, she also must navigate typical high school drama, which makes her a more relatable and likable character. While some of the students are a little too quirky to be believable, that doesn’t detract from the book’s entertainment value. Instead, it highlights some of the bizarre behavior of the ultra-rich. The story has the perfect blend of suspense, mystery, and teenage angst. Plus, there’s a mysterious boy Stevie isn’t sure if she should hate or love.

While most of the story revolves around the Ellingham’s school, the reader also gets a look into Stevie’s home life and the conflict between her and her parents. Stevie’s parents have never really understood why she can’t be “normal.” Increasing the conflict, Stevie’s parents also work for Senator Edward King—a rich, corrupt man who Stevie hates. While Senator King plays a small role in Truly Devious, the book hints that the senator will return in the next book in the series, The Vanishing Stairs.

The fast-paced mystery expertly blends the past and the present into an entertaining story that will keep the readers guessing until the very end. While the conclusion partially solves one mystery, the mystery of the Ellingham’s kidnapping ends with an interesting new clue which will have readers reaching for the next book in the series, The Vanishing Stairs. With interesting characters, a suspenseful mystery, and lots of surprising twists, Truly Devious will please mystery buffs who are ready for more mature content. If you’d like a tamer detective story, the Jess Tennant Mysteries Series by Jane Casey is a highly entertaining mystery that will thrill without the graphic images.

“This is about real people, not figures from fiction. I know this crime is popular—that crime itself is popular. But crime has a human face. If you’re going to study crime, you have to remember the people involved,” Charles. –Truly Devious