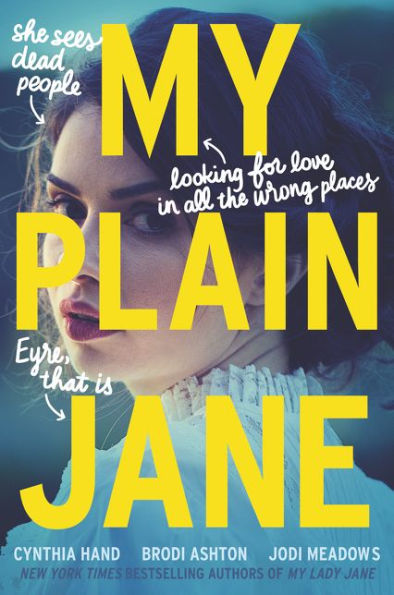 “There really was a girl. (Two girls, actually.) There was, indeed, a terrible treachery and a great fire. But throw out pretty much everything else you know about the story. This isn't going to be like any classic romance you've ever read,” Narrator. -My Plain Jane

There has been a murder at Lowood school, and aspiring writer Charlotte Brontë is on a mission to uncover the culprit. When an agent from the Society for the Relocation of Wayward Spirits shows up to interrogate the ghost of Mr. Brocklehurst, Charlotte is convinced that she can be of assistance. However, the mysterious Mr. Blackwood seems more interested in talking to her friend Jane Eyre than solving the case. Rumors of romance quickly spread through the school, but Charlotte can’t help but hope this problem might be supernatural in nature. After all, that would make a much better story.

As the star agent at the Society, Alexander Blackwood uses his rare ability to see ghosts to help him capture and relocate particularly pesky spirits. However, his real goal is to find whoever is responsible for his father’s murder and enact his revenge. With royal funding being cut and seers dying in the line of duty, it’s up to Alexander and his woefully incompetent assistant Branwell to keep the Society afloat. The last thing he expected was to discover an unusually powerful seer while out on a routine relocation. Now in order to save the Society, Alexander needs to convince Jane Eyre to join as an agent…a task that is much easier said than done.

Jane Eyre might have the ability to see ghosts, but she has absolutely no interest in becoming a Society seer. Some of her best friends are ghosts, and she would never dream of forcefully relocating them. Instead, she’s taken a job as a governess at Thornfield Hall under the employment of the enigmatic Mr. Rochester. While Jane finds herself falling for the brooding master of the house, Charlotte and Alexander accidentally uncover some disturbing supernatural secrets that have the potential to put both Jane and the entirety of England in danger.

In this twist on Charlotte Brontë’s novel Jane Eyre, co-authors Cynthia Hand, Brodi Ashton, and Jodi Meadows take readers on a wild, slightly spooky, romp through pre-Victorian England. You don’t have to have read Jane Eyre to thoroughly enjoy all the haunted hijinks, but good-humored fans of the classic will likely take pleasure in the ways that My Plain Jane pokes fun at its source material.

The always-curious Charlotte and charmingly grumpy Alexander make a compelling pair as they attempt to get to the bottom of an increasingly complex mystery, but it’s Jane herself that I believe readers will find themselves rooting for as she discovers that even very small and plain people can be very powerful when they let themselves be.

“There really was a girl. (Two girls, actually.) There was, indeed, a terrible treachery and a great fire. But throw out pretty much everything else you know about the story. This isn't going to be like any classic romance you've ever read,” Narrator. -My Plain Jane